Kriti Sanon and Arjun Kapoor will be coming together for the period drama Panipat for the first time. Also, this will be the first time where the duo will be playing characters of a historical tale. Hence, not surprisingly, quite a bit of pre-production prep has been planned for the lead actors of this film. Amongst this extensive prep, horse-riding is one of the key elements.

From Kangana Ranaut to Jacqueline Fernandez many actresses have been learning horse riding for their respective films. Similarly, now Kriti Sanon and Arjun Kapoor too have started their lessons for the same. Confirming the same, the actors took to social media to give a glimpse of their recent preparations. 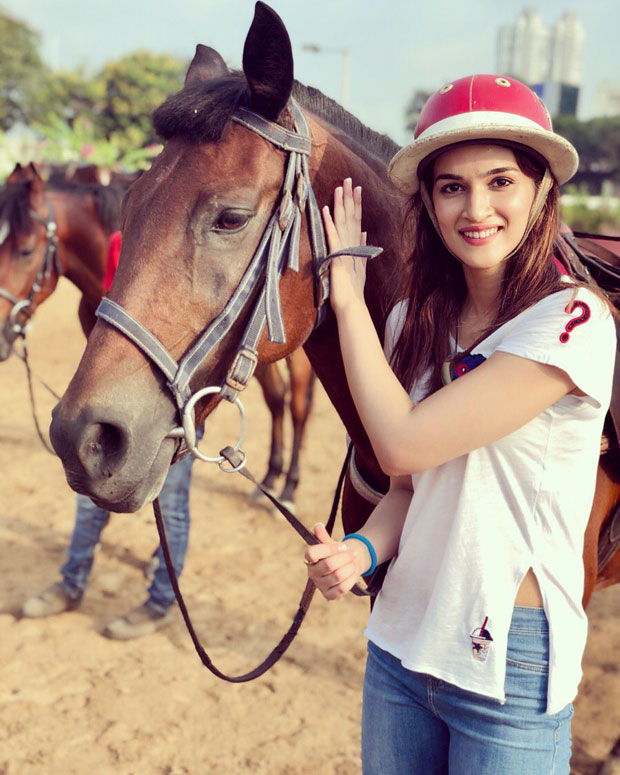 Kriti Sanon and Arjun Kapoor are learning horse-riding at Mahalaxmi Race Course, located in South Mumbai. Thrilled to be a part of the Amateurs Riders Club, Kriti took to her Twitter handle earlier in the day to share a picture with the magnificent brown beauty that she was practicing with. She added, “So good to be back with this beauty! Horse riding sessions start again with Suresh Sir & AmateurRidersClub .. this time for #Panipat.”

For the uninitiated, although the actress is playing the leading lady in a full-fledged historical film for the first time, let us remind you that Kriti had to learn horse riding for Raabta too. The film, which was about reincarnation, featured her two different eras and the actress had to learn it for a portion of the film.

On the other hand, her co-star of Panipat, Arjun Kapoor had taken to Twitter to speak about his horse riding lessons two days ago. The actor was seen kick starting the practice with the director of his film, Ashutosh Gowariker just a few hours before Sonam Kapoor’s wedding functions. It is a known fact that the actor has been busy with the preps of his cousin’s marriage since the last two days. Sonam tied the knot with beau Anand Ahuja today.

Besides Arjun Kapoor and Kriti Sanon, Panipat also stars Sanjay Dutt in the lead role. The film, based on the third battle of Panipat, is slated to release on December 9, 2019.

I personally take steps to reduce my carbon…

“The tough time that we're facing today is a…