Not too long ago we saw that Aishwarya Rai Bachchan, Abhishek Bachchan and their daughter Aaradhya Bachchan visited Rishi Kapoor and their family in the U.S. where the veteran actor has been taking treatment for cancer. The actor is expected to make his return to India soon but before that, Ranbir Kapoor planned to visit his father along with his Brahmastra star and real life bae Alia Bhatt. While the actor and the actress was seen in some of the photos that were shared recently, in recent photos shared by Riddhima Kapoor Sahni, the actor is seen to be spending time with his family. 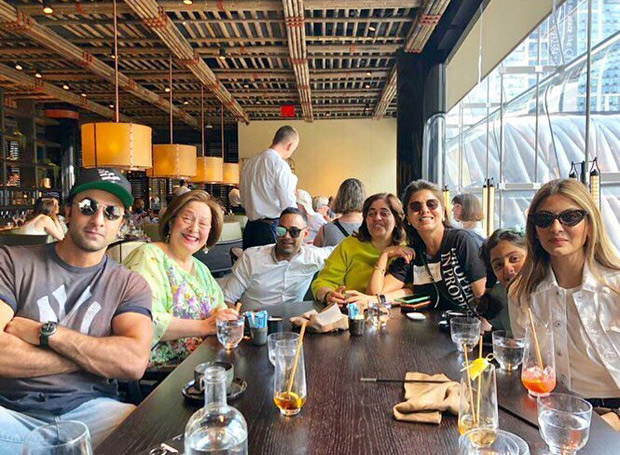 Riddhima Kapoor Sahni recently posted a series of photos from their recent family outing wherein Ranbir Kapoor is seen to be enjoying a wonderful time with everyone over lunch. Riddhima, who is a jewellery designer by profession, is seen keeping company to her parents, Rishi Kapoor and Neetu Kapoor during these difficult times and now that, the veteran actor has become completely cancer free, the entire family is rejoicing the moment. Here’s a glimpse of the photos:

Readers would be aware that many Bollywood celebrities who visited U.S. including celebrities like Shah Rukh Khan, Aamir Khan amongst others decided to visit Rishi Kapoor and spend time with the actor. Photos of the same were shared by Neetu Kapoor who has been quite active on Instagram and other social media platforms. Now that the actor is prepping to return to his country, he will make his comeback on the big screen with the film Jhootha Kahin Ka starring Sunny Singh, Omkar amongst others. The film is expected to hit the theatres on July 19.