Well, we all saw a glimpse of how the Jonas family rocked their respective Indian avatars during the much talked about wedding ceremony of Priyanka Chopra and Nick Jonas. While there was much secrecy around releasing pictures during the wedding of these two global stars, soon their exclusive pictures were out and many couldn’t stop gushing about the lavish yet intimate affair on social media. Amidst many guests and family members currently sharing glimpses of the wedding, we chanced upon this picture of the Jonas family which included the Jonas brothers and their respective partners Sophie Turner and Danielle Jonas posing at an Indian wedding. 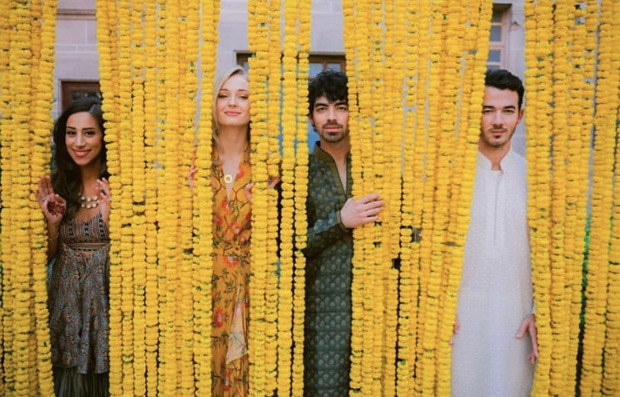 Going by the yellow marigold backdrop, it seems that the four of them were a part of the Indian wedding setup and needless to say that the last Indian wedding that the four of them attended was the starry wedding of Priyanka Chopra and Nick Jonas. Even though the caption doesn’t leave a hint of where it was, we may safely assume that this was indeed a part of the Nickyanka wedding affair.

Joe Jonas recently shared this picture on his official Instagram page saying, “When someone mentions in-and-out.” Quite aptly, the picture features the four of them in a peek-a-boo moment amidst a series of marigold garlands.

When someone mentions in-n-out

Coming to the lavish Nickyanka wedding affair, let us tell you that Priyanka Chopra tied the knot with Nick Jonas in a three day ceremony in Hindu and Christian style weddings. Besides the Mehendi and Sangeet function that was held along with the weddings in Jodhpur, the actress and her husband hosted a few receptions in Mumbai and Delhi for friends, family, film industry and media.

Also Read: This picture from Priyanka Chopra – Nick Jonas wedding will definitely bring a smile on your face!