Priyanka Chopra, who is in the midst of the promotions of Isn’t It Romantic?, has been sharing glimpses of her love story with Nick Jonas during her talk show appearances. Similarly, the Instagram pages of Nickyanka fans are filled with glimpses of their wedding pictures. With each passing week, we get a fresh new picture from the varied ceremonies of Priyanka and Nick’s wedding. And now, the recent picture is from the post Church wedding bash that was held in Jodhpur. 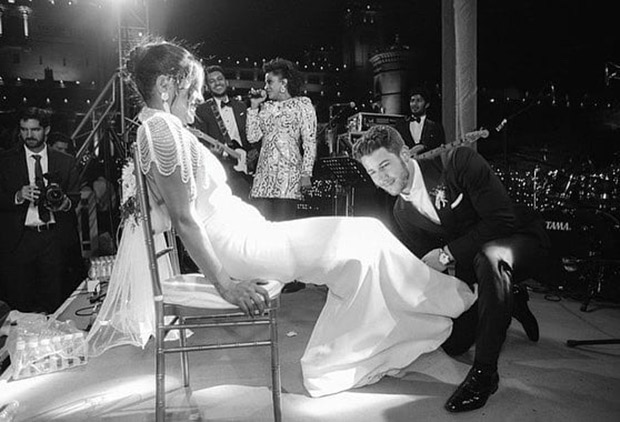 We all have seen the first dance video of Priyanka Chopra and Nick Jonas which went viral on social media. Similarly, there were other rituals of the White wedding that were followed during this Jodhpur ceremony. One amongst them was the garter ceremony where the groom has to find the garter on the girl’s leg and later throw it to the audience [more importantly towards his groomsmen and the first bachelor who catches it will be married next].

Obviously Nickyanka fans were thrilled to find this picture and not surprisingly, the image once again garnered immense attention on social media.

From jhootha chipayi to garter, it seems that Priyanka Chopra and Nick Jonas have decided to follow almost every tradition at this fusion wedding. The couple tied the knot last year in December in Hindu and Christian rituals. They also held over three receptions for their close friends, relatives, media and fraternity colleagues. The duo then took off for their honeymoon later this year, to Switzerland and later to Carribean Islands.

If reports are to be believed, the couple also has some special plans for their first Valentine’s Day post marriage.

Also Read: Priyanka Chopra FREAKED OUT before getting married to Nick Jonas