It is a known fact that Priyanka Chopra is making a comeback in Bollywood films with the Shonali Bose directorial The Sky Is Pink. The film traces the journey of late motivational speaker Aisha Chaudhary's parents and their love story. With Farhan Akhtar playing the role of Priyanka's husband, Zaira Wasim plays Aisha in the film. Last we heard about the film is that the entire team is in Andaman Islands completing a major schedule. And now we hear that it’s a wrap!! 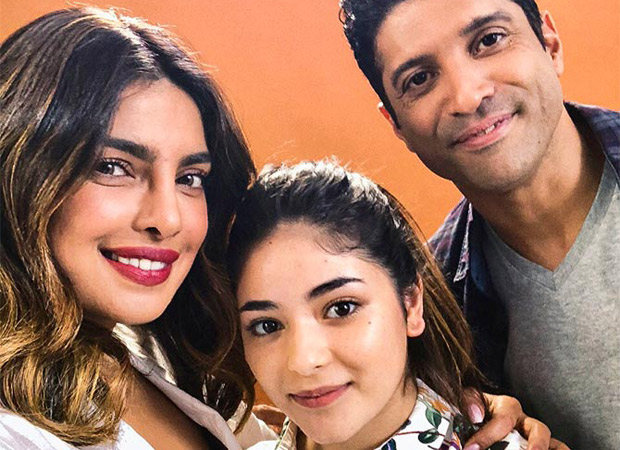 Priyanka Chopra and Farhan Akhtar along with Zaira Wasim posted many pictures as they shot in Havelock Islands in Andaman. But the recent post shared by the official handle of the production house Roy Kapur Films has confirmed that it is indeed pack up. Posting a picture of the clapperboard saying, “Bidding goodbye to the beautiful island! It's been a great week in the Andamans. Sea you soon.” Here’s a look at the post:

In the recent past, we got many glimpses of the team shooting for The Sky Is Pink as they shared some picturesque images and selfies from the island.

Coming to the film, Priyanka Chopra is expected to play the mother of Aisha Chaudhary with Farhan Akhtar as Aisha’s father. On the other hand, we also hear that Chopra will be seen aging from 22 years to 60 years old. In fact, besides Roy Kapur Films, hair stylish Florian Hurel too shared these pictures of Priyanka Chopra, calling it a wrap!

And it’s a wrap. @priyankachopra thank you for the experience.

Today is the last day eating chips on the set of the sky is pink . ???? Excited to show you the process of the different hair changes I have realised on PC for the film . To be coming soon .... @roykapurfilms

The Sky Is Pink is slated to release on October 11.

Also Read: The Sky Is Pink: Priyanka Chopra and Zaira Wasim are the new gal pals in B-town

EXCLUSIVE: “They will have to offer me…