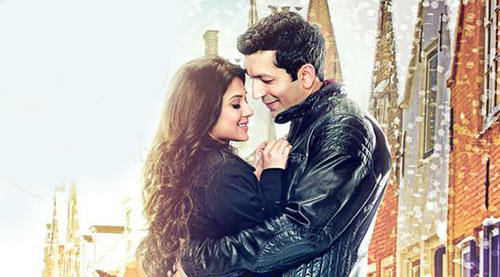 The promo of Phir Se... has been unveiled and for the last few days, speculations have been around the source for the core plot of the film. Since the film, which at its

core is a love story, apparently makes a strong statement around re-marriage and the apprehensions surrounding it, one is led to believe that it could well be close to either of the two

As it turns out, there is an element of truth to this as Phir Se... indeed picks up from a divorce that Kunal had seen up, close and personal.

"That's correct," informs our source, "Kunal hasn't been talking about this yet, but the film's story is indeed close to his heart. Reason being that he has seen the kind of emotional ride that a

person goes through when there is heartbreak followed by divorce and then love comes calling again. Though it seems tough to pick up pieces and start life afresh, Kunal truly believes that it is

possible. He has a firsthand experience on that."

However, contrary to speculations, this isn't the tale of Kunal's own marital life. Instead, this is something that Kunal's sister went through close to 25 years back.

"Yes," the source continues, "Kunal's elder sister was once divorced and then got remarried. This was 25 years back and ever since she found love again, it has been a wonderful life she has been

living. Kunal was quite young back then but was emotionally mature enough to understand what was happening on the home front. Fortunately for the Kunal household, there was no hullabaloo made

around the entire situation. The elderly folk didn't come announcing that all was over for the young woman."

During the entire flow of episodes, Kunal's mother stood like a rock with her daughter. She inspired her to take things in her stride, get back to work and start life afresh. Moreover, since

Kunal's new brother-in-law too was coming from a broken relationship, the pair could find good connect on the emotional front. Kunal remembered these instances and knew that after a frothy Hum

Tum, it was time to take a deeper dive into emotions and come up with Phir Se...

On contacted, Kunal was forthcoming in telling the tale.

"Yes, Phir Se... is a story close to my heart and home. I have experienced this in my younger days itself. You can't get more close than that in a relationship, when your own sister is going

through such trying times. The film is about how to start life afresh after a broken marriage or romance," says Kunal.

He is not here to make a statement on remarriage though, "I am here just to express myself, say it and just leave it out there. You could be 14, 24, 34 or 44 year old; when your heart breaks then