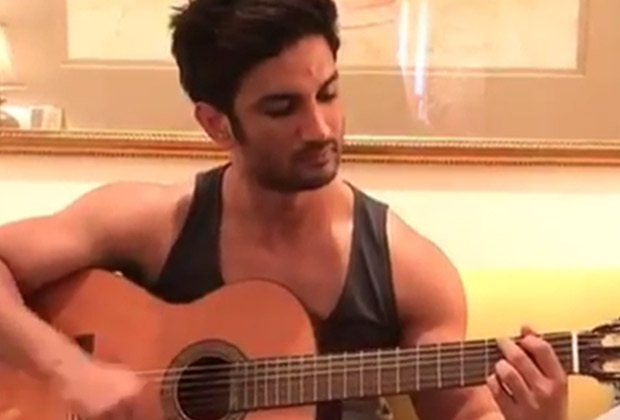 While he is being raved all over the country, courtesy his portrayal as India’s renowned skipper Dhoni in M.S. Dhoni: The Untold Story, Sushant Singh Rajput has already decided to move on with his next. The film titled Takadum is all set to bring back the sizzling chemistry between Sushant Singh Rajput and Parineeti Chopra after their previous outing Shuddh Desi Romance in 2013.

Takadum is said to have Sushant Singh Rajput playing the role of a musician and the actor has already kick started his prep for the same. Recently the actor was seen playing the guitar and it seems that he has developed an obsession for it. Sushant has also described the plot of the film without revealing much stating that it is about a girl who has sky in her eyes and about a boy whose dream is touch the sky. Posting the video of himself strumming a few notes Sushant added, “Some guitar between the interviews”. Responding to Sushant’s post was director Homi Adajania who tweeted saying, “@itsSSR stop being modest... I've seen you play, tie your shoelaces & do dialogues at the same time! #workhardplayharder #Takadum”.

Interestingly, Parineeti Chopra plays the role of an aspiring singer in Meri Pyaari Bindu. On the other hand, Sushant will be seen in a romantic action film with Kriti Sanon, Raabta, which marks the directorial debut of Dinesh Vijan.

Kriti Sanon uses her height to measure the…