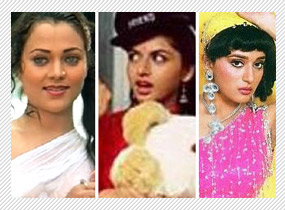 Over the last six decades, it is indeed a fascinating exercise to see which films proved the topmost box-office hits in each year from 1950 till the present. Their successes proved eye-openers not just for film buffs, industry and trade but frequently for their makers themselves, proving that hits happen and cannot be designed! In Part 4 of this 7-part series, we examine the films that have topped the box-office each year from 1980 to 1989.

A decade of change

The '80s was a decade of change; generally perceived as shifts of a retrograde nature, though that is not completely fair. The exit or fading of giant singers (including Mohammed Rafi and Kishore Kumar who passed away at their peaks), many of the lyricists and most of the legendary composers ganged up with factors like extreme social degeneration, political shenanigans in the country resulting in major angst and frustration along with an increase in violence and insurgency in many parts of the country. Significantly, while the love story Ek Duuje Ke Liye ended with violence and tragedy, Qurbani, Hero, Nagina and Tezaab were all romances against the backdrop of crime!

The third angle of this lethal triangle was the emergence of revolutionary new technology whose flipside became more dominant - like video piracy, audio piracy and the use of stereophonic sound to inculcate alien musical trends like disco, frenetic beats and a certain disregard for lyrics. Legal and illegal watching of films at home saw movie producers catering to the lowest common denominator of audience that could not afford to buy video players and formed the majority of the reduced theatre-going audience. And the anger towards the system resulted in violence-studded political thrillers galore.

Terrorism too reared its ugly head in certain states, adding to increased on-screen violence reflected in the first three anti-terrorist dramas - Karma, which missed the 1986 top slot because of its huge budget vis-Ã -vis Nagina, Mr. India (made with a comic-book tenor) and Hukumat (which actually topped 1987's films!). In fact, the '80s go down in history as the decade when four adult-certified films topped the years, whether because of sex (Ram Teri Ganga Maili), violence (Aaj Ki Awaz, Hukumat) or the supernatural element (Nagina)! Adult films automatically curtail a big chunk of viewers, but this was really an amazing and mysterious paradox!

It is a tangy coincidence indeed that Raj Kapoor's swan song Ram Teri Ganga Maili vied for top slot with Sooraj R. Barjatya's debut film Maine Pyar Kiya, which was almost a rehash of Kapoor's Bobby, the biggest hit of 1973. Maine Pyar Kiya, however, had its share of triumphs - it saw lyricist Asad Bhopali's smash-hit but short-lived comeback (because he passed away less than a year after its late December 1989 release), and an equally transient breakthrough and national acceptance respectively for composer Raamlaxman and singer S.P. Balasubramaniam. But above all it was the first solo lead of Salman Khan, the man who was to become Numero Uno 20 years after his superstardom began with this film! Maine Pyar Kiya also completed the process of the return to the movie halls of up market audiences. This had begun with 1988's biggest hits Tezaab and Qayamat Se Qayamat Tak and was consolidated before Maine Pyar Kiya in 1989 by Ram Lakhan, Tridev and Chandni, the other top hits of the year. In fact, Subhash Ghai's Ram Lakhan lost the Numero Uno slot just two weeks before the year ended because of the release of this Barjatya whopper!

Qurbani trounced Aasha, Dostana and Insaf Ka Tarazu in 1980, all four romantic triangles, thanks to its very freshness and slick packaging, including the music. Laawaris was runner-up in 1981 followed by Love Story. Prem Rog, Nikaah and Namak Halaal followed Vidhaata in 1982. Coolie in 1983 grossed more money than Hero, but the profit ratio of Hero was higher. Tohfa in 1984, Pyar Jhukta Nahin and Mard in 1985, Karma in 1986 and Khudgarz in 1987 were the other runners-up.

Shifts in tastes and trends

Qurbani proved categorically that the audience was now open to fresh areas in cinema. It had the first combo of an NRI composer - Biddu - and Pakistani pop crooner based in London - Nazia Hasan stepping in for a specialized song - Indian cinema's first modern club number 'Aap Jaisa Koi Meri Zindagi Mein Aaye'. This 'trend' of musical infiltration is endemic in today's times, but unlike today's tunesmiths, Kalyanji-Anandji matched the 'outside' chartbuster with four of their own, including another club song with even greater staying power, 'Laila Main Laila'. Ek Duuje Ke Liye, thanks to the director K.Balachander, saw an authentic South Indian voice used for a South Indian hero.

Major changes came in music with a new guard of singers led by Anuradha Paudwal, Alka Yagnik, Kavita Krishnamurthi, Amit Kumar, Nitin Mukesh, Suresh Wadkar, Manhar, Shabbir Kumar and Mohammed Aziz stepping into center stage as even Lata Mangeshkar and Asha Bhosle began to curtail work to an extent. Choreography too saw a mix of traditional and new styles and a new generation of stars came in with an influx of star-sons. Kamal Haasan, Rati Agnihotri, Sanjay Dutt, Padmini Kolhapure, Jackie Shroff, Meenakshi Seshadri, Raj Babbar, Mandakini, Sridevi, Madhuri Dixit, Anil Kapoor, Chunky Pandey and Salman Khan featured in the top hits alongside other artistes who never reached anywhere like Madhavi and Swapna from the South, Rajiv Kapoor, Divya Rana and Bhagyashree. Aamir Khan and Juhi Chawla narrowly missed the bus when their QSQT came in second to Tezaab in 1988.

Subhash Ghai was the only director to have two Numero Uno toppers (Vidhaata and Hero in consecutive roles) in this decade, narrowly missing a third film (Ram Lakhan). Both his films had Shammi Kapoor and Sanjeev Kumar as character artistes, and Shammi, with his role in Hukumat, actually had the highest score among all male artistes - three films! Rati Agnihotri (Ek Duujeâ€¦, Hukumat) and Mandakini (Ram Teriâ€¦, Tezaab) had two films each. Laxmikant-Pyarelal had five (Ek Duujeâ€¦, Hero, Nagina, Hukumat, Tezaab) films and Kalyanji-Anandji (Qurbani, Vidhaata) had two. Ek Duujeâ€¦, Hero, Nagina and Vidhaata saw Anand Bakshi maintaining his lead with four films.

But the stage, as indicated by Tezaab and especially Maine Pyar Kiya, was set for a sweeping change in the '90s.