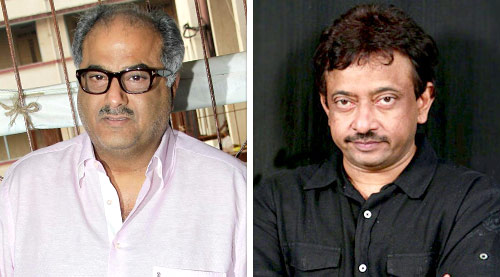 On Saturday when it was Karva Chauth, the day Indian wives devote to fasting and praying for their husbands' well-being, Boney Kapoor had to reckon with his wife actress-diva Sridevi being informed that Ram Gopal Varma had decided to name a film on pubescent sexual fantasies as Sridevi.


Apparently Boney tried to keep the disturbing news away from his wife at least until Karva Chauth was over. However Sridevi came to know of the truth.


Says a source, "It really hurt her that Ram Gopal Varma who always claimed to be her ardent fan would use her name to promote sleaze. Her Karva Chauth was spoilt. Boney was away in Jaipur when she got to know of Ramu's latest antic. By the time Boney rushed back on Saturday evening the damage was done."


Speaking on the matter Boney said, "It came as an ugly unpleasant shock to know that Ramu was using my wife's name in such a way. He has always claimed to be her fan. Ramu and I have collaborated on three films as producer-director. He has been closely associated with me. He has also worked with Sri in a Telugu film Kshanam Kshanam."


In fact Ramu's film Mast about a fan-boy (Aftab Shivdasani)'s adoration for a screen queen (Urmila Matondkar) was based on Ramu's illimitable admiration for Sridevi.


Angrily Boney says, "Doing something like this shows a perverse mind and an absolute bankruptcy of ideas."


After hearing of the creative travesty Boney did call Ramu. "I spoke to him, asking how he could do something like this, considering our long association and his repeatedly-confessed admiration for Sri. Ramu told he will call me back the next day. When he didn't, I rang him . But he wouldn't take my calls. Instead he sent me the press release announcing the film."


Hurt and angry Boney has sent Ramu a legal notice. And that isn't the end of the concerned husband's endeavour to stop Ramu's new brain-wave from going further.


Says Boney, "It isn't as if I've sent the legal notice and forgotten about the matter. I'll go to any length to protect my family. There are many legal ways to stop slander."


"They are burning Ramu's effigy after this announcement. Why does he need to do all this?' asks Boney.


Even we are wondering the same.


Ramu refused to answer my calls and messages.