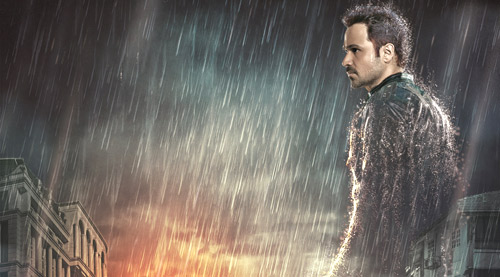 The debate is back all over again and the jury is out. It is just that the verdict was announced within hours of the film hitting the screens. Mr. X has proven to be one of the biggest disappointments of the year so far and has turned out to be a commercial failure. Surprisingly, two weeks after the film's arrival, those associated with it are out in open around the many possible reasons that led to its downfall. If the first reason stated was marketing by Fox, second was content from Vishesh Films.

It could well have been the other way round!

For starters, Mr. X didn't work at the writing stage itself. What seemed like an interesting idea with references of Krishna and Arjun went whoosh when the actual film was put together. If this one line mythological reference was waiting to be churned, surprisingly it was totally kept aside other than a fleeting mention in the promo. Secondly, and most importantly, for an invisible character, the character has to be, well, invisible.

In case of Mr. X, he was visible throughout. Well, most of the time.

Thirdly, and very importantly, a vigilante affair ought to stick to basis, which is - focus on being a vigilante. Here it was personal vendetta, a basic 'badla' story, which was not even as riveting, mean or deep rooted as Badlapur. Well, you do stop taking the film seriously when the villain jumps after a hero from atop a skyscraper and gets into a 'dishoom dishoom' mode.

Want to watch a vendetta story? Check out Aparichit (Anniyan in Tamil)!

So what went wrong? Well, story and storytelling for sure. Who made it wrong? No one would know. What happened behind closed doors of an office is something best left privy. Was it the marketing team that came up with the idea of promoting the film as a vigilante, 3D, family friendly Emraan Hashmi film which has its strengths in the invisibility angle? Or was that the pitching that Bhatts had for Emraan Hashmi when he was brought on board, and then was duly passed on to marketing folks to harness to the fullest?

The fact remains that what came on screen surprised the most hardcore fans and followers of Vishesh Films. Everyone associated with the film will move on though, and rightfully so, as there are decades of experience to pull everyone back. Mahesh Bhatt has announced that he owns it all as the leader. Vikram Bhatt, the gentleman that he is, has acknowledged too that 'Unwillingness to accept blame is the first symptom of such elimination', which means he is happy to introspect too. The maker of Ghulam and Raaz certainly knows how to make a better package next time around.

As for Emraan Hashmi, the man of the show, he still enjoyed a better opening weekend than many of his other counterparts who have failed miserably this year. Yes, he has done better and this isn't a score that he would be proud of.

The best (and the ironic) part is that the entire team, including Fox, is returning with Hamaari Adhuri Kahani next.

It could well turn out to be 'Hamaari Poori Kahaani' if the honesty is demonstrated in the content as well as pitching.

The cry of 'All Is Well' could well be heard all over again!