Akshay Kumar is undoubtedly the fittest actor in Bollywood. The actor is very particular about his daily workouts and indulges in different regimes to keep his workouts refreshing and interesting. From early morning workouts to different types of sports, swimming to volleyball, jogging to gym training, Bollywood’s Khiladi does it all to stay healthy and fit. Just recently, he had shared a video of himself doing core workout even after reportedly suffering an injury on the sets of his film, Kesari. But, no injuries can stop the Khiladi. 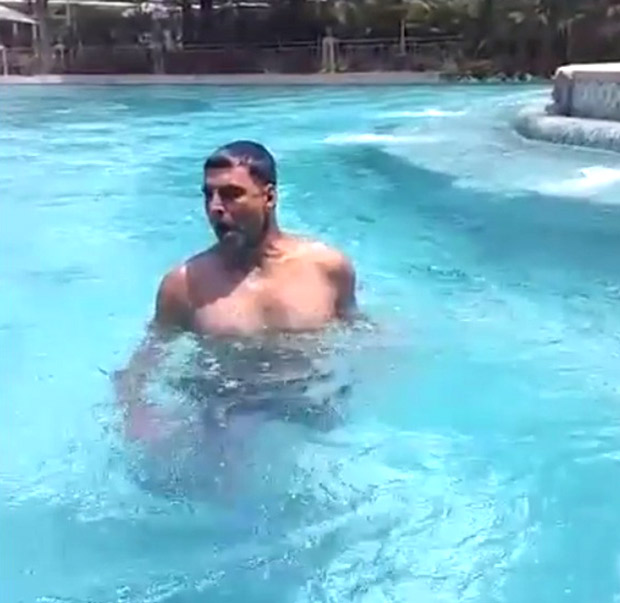 Akshay Kumar, on Sunday, took the workout routine to next level. He shared a video of himself enjoying a swimming session but with a twist. He can be seen swimming with weights in his hands. Enjoying the day off but not skipping his workout session, he captioned the video, "Nothing like a dip in the pool in the scorching summers. Here I am swimming with weights...please ensure you're good at swimming to attempt this. It's a great leg workout and helps in overall core building."

On the work front, Akshay Kumar has an array of projects in the pipeline some of which will release this year. In February 2018, he was seen in R Balki’s directorial Pad Man. He will be next seen in Reema Kagti’s Gold, which is set for August 15, 2018, release. The film is based on the real story of Indian Hockey Team’s first gold medal win after independent India. The film has been produced by Excel Entertainment.

As of now, Akshay Kumar is shooting for Kesari which also stars Parineeti Chopra in the lead. Recently, the film was in news as fire broke on the sets. Now, the cast and crew will resume the shoot after 10 years. He is also on board for Housefull 4. The film stars Riteish Deshmukh, and Bobby Deol. It is reportedly set for Diwali 2019 release.

Nothing like a dip in the pool in the scorching summers ???? Here I am swimming with weights...please ensure you're good at swimming to attempt this. It's a great leg workout and helps in overall core building. #FitIndia #LoveForTheOutdoors #SundayFunday

Also Read: Akshay Kumar and Bhumi Pednekar return as crusaders of Swachh Bharat Abhiyaan yet again and here are the details