Kangana Ranaut recently called out many celebrities in Bollywood on the subject of nepotism and also for not speaking up on political issues. But when it came to superstar Kareena Kapoor Khan, the Manikarnika – The Queen Of Jhansi actress was showering appreciation at the actress. During the success bash of her blockbuster, Manikarnika while Kangana slammed Hrithik Roshan, Kareena’s bestie Karan Johar and her cousin Ranbir Kapoor, she was all praises Veere Di Wedding actress and called her as an epitome of a perfect woman. 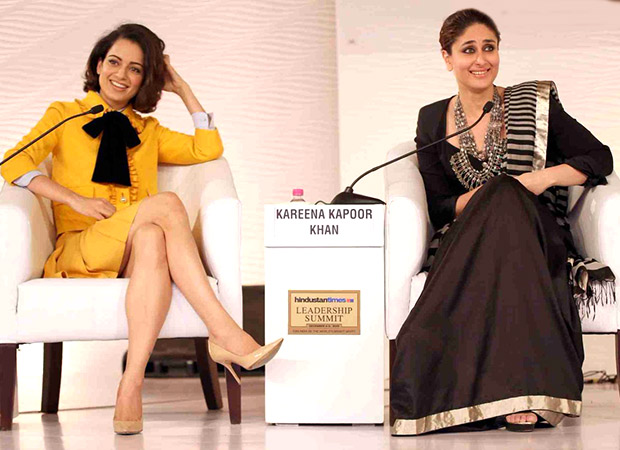 Kangana Ranaut and Ankita Lokhande spoke briefly to the media before they set the dance stage on fire at the success bash of Manikarnika. During the same, the actress was asked about Kareena commenting on Kangana’s own biopic. Responding to Kareena’s encouraging comments on the biopic, Kangana said, “Kareena is absolutely lovely. I think she is one of those graceful and dignified people. I always see her and feel that she is the perfect actress, wife and mother. She is the epitome of a perfect woman. She is always very encouraging and has always sent such lovely messages. She has always been inspiring to me.”

Kangana Ranaut had announced about making a biopic on herself and her journey to stardom which will be directed by her. While she has other projects that may take precedence, the actress asserted to the media during the success bash of Manikarnika – The Queen Of Jhansi that the film will go on floor soon. On the other hand, when Kareena came across the news of Kangy planning her own biopic, the actress was applauded the artiste for the step.

In earlier reports, we had mentioned that Kareena Kapoor Khan had called Kangana Ranaut as an intelligent woman in real life and an excellent performer. Thanking the actress, Kangana too didn’t stop herself from showing her admiration towards Saif Ali Khan’s lovely begum.