After introducing the comical character of Surya from Mard Ko Dard Nahi Hota, now the makers have released the new comical poster along with the dialogue. The new posters have dialogue banter between Suppandi, Shambu and Surya, where Suppandi and Shambu get a new friend in Surya. Ahead of the release, RSVP’s Mard Ko Dard Nahi Hota makes a comeback with a kickass, funny, comic poster series presenting Surya aka Abhimanyu Dassani as a new comic character in the tinkle magazine. 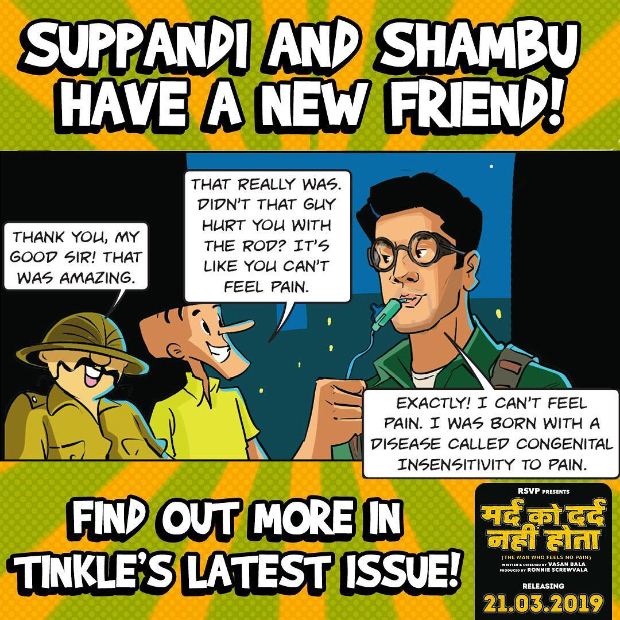 A treat to all the fans, Surya has found a special place for the comic lovers in the magazine along with the popular Shikari Shambu, whom the world perceives as brave but in reality the character is a lazy hunter and Suppandi who in turn is a village simpleton, considered as the most famous among the comic lovers.

Introducing Surya as a character, a man who feels no pain and his expression with no effect is sure to make the comic fanatics fall in love with this character. Presenting the distinct and unique characters with lead Abhimanyu Dassani with two comical characters shows that the film is sure to treat the audience with a different genre. The makers took to the social media and tweeted the poster and captioned it: "Sorry, if you don't get it. It's a 90's thing, you see? Watch how Surya pairs with the tinkle duo, Suppandi & Shikari Shambu in their latest edition! #MardKoDardNahiHota @abhimanyud @radhikamadan @vasanbala @jimit_trivedi @gulshandevaiah78 @maheshmanjrekar #RonnieScrewvala @tinklecomicsstudio".

Abhimanyu Dassani and Radhika Madan will be seen packing a punch with unconventional martial arts in the gripping action sequences of the film. Produced by Ronnie Screwvala under the banner of RSVP, Mard Ko Dard Nahi Hota is written and directed by Vasan Bala. Starring Abhimanyu Dassani, Radhika Madan, Gulshan Devaiah, Mahesh Manjrekar and Jimit Trivedi, Mard Ko Dard Nahi Hota is all set to hit the theatres on 21st March 2019.