Varun Dhawan, who was last seen in Kalank, posted a selfie of him with the inked finger after he cast his vote. While he urged his fans to go and vote, the actor did something sweet whilst he was at the voting booth. The actor, known for his kind nature, played a good Samaritan as he helped an old lady at the booth. Photos of the same are currently going viral on the internet. 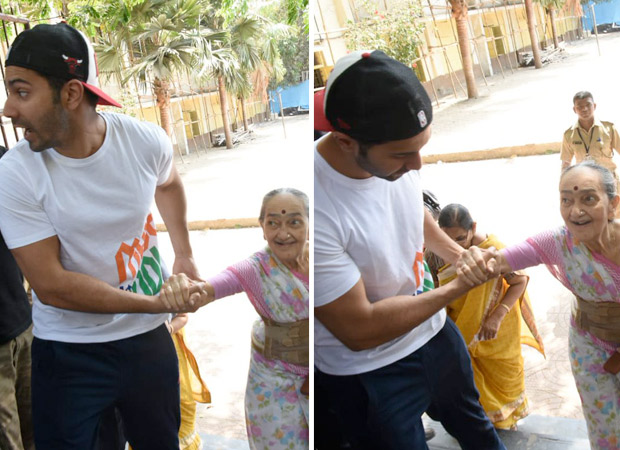 While the media lenses were glued to the areas where stars were arriving to cast their vote, many of them managed to get to see this adorable side of the Kalank actor. Varun Dhawan was seen helping the old lady climb the stairs at the voting booth and there are also photos of the lady giving her blessings to the actor for this gesture.

Varun Dhawan, who recently celebrated his birthday, will now be turning his attention into Street Dancer 3D which reunites him with the team of ABCD 2 including Shraddha Kapoor and Prabhu Deva. While the actor is planning to move on after the Kalank debacle, he has also started prepping for Coolie No. 1 remake which is in the pipeline after the Remo D’Souza dance film. The film will feature him opposite Sara Ali Khan for the first time.

On the personal front, Varun Dhawan recently stated that he would like to tie the knot soon with Natasha Dalal but has rubbished the rumours of his wedding this year.