Koffee With Karan season 6 is seeing interesting pairs come together to chat with Karan Johar. As many siblings have already made their appearance on the show, brothers Shahid Kapoor and Ishaan Khatter are all set to come together to share a cuppa. This would be the first time the siblings will be doing an interview together. The promos for the upcoming episode are out and it seems like the brothers will be revealing some interesting details. 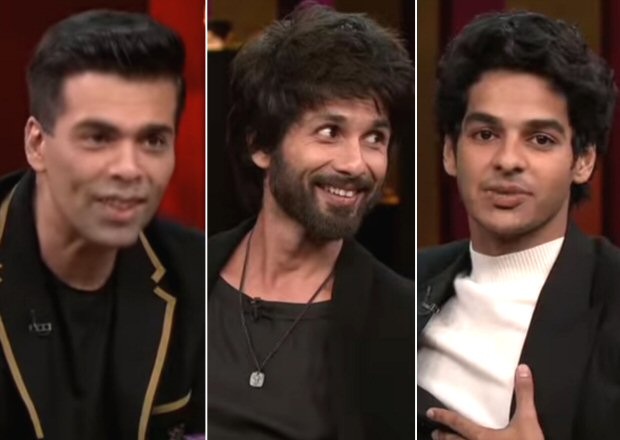 It is well known that Janhvi Kapoor and Ishaan Khatter starred together in Dhadak which was helmed by Shashank Khaitan. They are often seen together hanging out, attending parties, and sharing pictures online. So the dating rumours began eventually when they started Dhadak promotions last year. While Janhvi Kapoor has gone on record on KWK and denied dating Ishaan, Ishaan was asked similar question about her by Karan in the promo. But, Shahid came in defense of his brother and quipped, "Janhvi is not special like that. He buzzes around a lot of people. And it started many years ago with his mother and me and now you (Janhvi) are one of those people he buzzes around. He's a buzzy guy."

However, the highlight of the promo was when Karan asked Shahid Kapoor what piece of advice he would give Priyanka Chopra’s husband Nick Jonas. Shahid said, "Never back down buddy, you’re with the original Desi Girl (winks)."

It is to be noted that Shahid Kapoor and Priyanka Chopra reportedly dated when they starred in Kaminey. While the duo never confirmed their relationship, Shahid had admitted on KWK earlier that he was cordial with Priyanka even after their break up. And that was proved when Shahid Kapoor attended Priyanka - Nick's Mumbai reception with his wife Mira Rajput last month.

Coming back to the episode, for the uninitiated, Ishaan Khatter had starred as a child actor in Vaah! Life Ho Toh Aisi! which starred Shahid Kapoor and Amrita Rao. He was an AD on Udta Punjab before Ishaan made his debut in 2018 in Majid Majidi’s Beyond The Clouds. The film proved that the newbie is very talented. He then went on to star in Dharma Productions Dhadak, remake of Sairat, which marked the debut of Janhvi Kapoor.

Brothers. Actors. Heartthrobs. Hold on to your hearts as @shahidkapoor and @ishaan95 come over for some Koffee, next week. #KoffeeWithKaran #KoffeeWithShahid #KoffeeWithIshaan