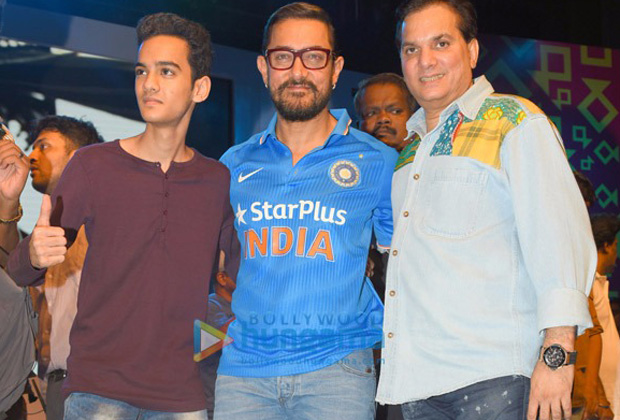 Today at MAMI 2016, a long discussion with Aamir Khan and gang got them talking about one of his biggest hits Jo Jeeta Wohi Sikandar. The film, which dealt with teenagers as different schools compete for the most coveted trophy, is among the superstar’s cult hits.

The entire cast of the film, along with director Mansoor Khan, choreographer Farah Khan and music director Lalit Pandit came together to celebrate the reunion of the film after 24 years. During their conversation, the cast and crew revealed some interesting facts. We list down some of the most fascinating tales from the making of the film.

Akshay Kumar’s loss was Deepak Tijori’s gain: “Actually Akshay Kumar had auditioned for the role played by Deepak Tijori but he was rejected,” revealed Farah Khan, who was also an assistant director on the film. For the uninitiated, Deepak Tijori played the role of spoilt brat Shekhar Malhotra in the film.

Jo Jeeta Wohi Sikandar had several setbacks: Neither Ayesha Jhulka nor Deepak Tijori were the first choices for their respective roles in their films. First Nagma and then Sheeba was supposed to play the leading lady of the film. In fact, the film had to face severe setbacks considering that almost 80% of the movie was reshot.

Aamir Khan got Milind Soman fired: “Initially the role of Deepak Tijori was supposed to be done by Milind Soman. However, he and his gang were giving us a lot of trouble on the sets because of which they were fired,” revealed Aamir and Mansoor.

The story behind Ayesha Jhulka randomly wearing a cap in the climax scene: While the whole of Model school was seen in uniform, Ayesha was randomly seen sporting a cap (sort of a continuity error) during the final race sequence and there is a reason behind it. She was actually injured. During the shoot, a nail had pierced into her forehead and she was seriously injured. In order to hide the injury, she was seen wearing the cap throughout the climax, including the end where she is seen clapping for Sanju.

Imran Khan wasn’t told about the underwear prank: Imran Khan played the younger version of Aamir Khan aka Sanjaylal in Jo Jeeta Wohi Sikandar. “He wasn’t aware that his pant was going to be pulled whilst riding a bicycle. It was my idea,” recalled Aamir Khan. Readers may recall that the song ‘Rooth ke humse’ in the film featured a few sequences that showcased the childhood bonding between brothers Mamik and Aamir, in which there was a scene of the latter pulling down the pants of the former.

Pooja Bedi’s Marilyn Manroe dress blowing moment was a challenge to recreate: Almost everyone who belonged to the 90s recollect the song ‘Pehla Nasha’ and the Marilyn Monroe moment of Pooja Bedi in the film became iconic. Well you may know that it was choreographed by Farah Khan but here’s something that is even more interesting. “I was the one holding the fan to blow off Pooja's dress like that,” revealed Deven Bhojani, who was also an assistant director on the film. "Pooja was wearing a red thong and a spot boy almost fainted,” added Farah Khan. Aamir Khan who looked a tad bit startled at the revelation added, “Where was I during this shoot?!”

Aamir Khan stood on a wooden ramp to match his height with Pooja Bedi: Aamir Khan’s co-star in the film was Pooja Bedi who is quite taller than him. Talking about the scene where Pooja slaps him after she becomes aware of the truth, Pooja revealed, “Aamir used to stand on a ramp in the scene where I slapped him… Well it was because of the height difference that was visible in the camera.”

Deven Bhojani accuses Aamir Khan of making him a smoke addict: Remember the scene where Aamir and friends are smoking? “Aamir made me practice smoking cigarettes for the film and I eventually became an addict,” confessed actor-filmmaker Deven Bhojani.

Aamir Khan, the prankster: In an interesting turn of events, we saw the mischievous side of this otherwise serious superstar and one of the secrets that was leaked was that Aamir spat on all his actresses’ hands. It wasn’t only in the past as he continues to do so even now. In his own words, Aamir joked, “Actresses get lucky after that.” Pat came the reply from Deven Bhojani, “It didn’t work for us side actors.”To which Aamir commented, “It works only on actresses. In fact, I even did that to the Dangal girls.”

Deepak Tijori was scared of shooting the film: Deepak Tijori had an interesting confession to make and added that he was actually scared of Mamik. Mamik played the role of Sanjay’s brother Ratan. “I was scared of Mamik because he was known for his anger and the way he beats up people. On top of that, I had to race with both Mamik and Aamir. It was really tiring,” said Deepak.

Directors, producers were extras:Another surprising revelation coming from Farah Khan was that, “Tony D’Souza (Anthony) and Bunty Walia were supposed to play a part of the original villain gang. However, they were finally spotted during the cow dung prank played by Aamir and Pooja in the film.”

Aamir Khan wants Mansoor Ali Khan to direct: Everyone at the session insisted that Mansoor returns back to direction. Mansoor however made a shocking revelation. "I told Rajkumar Hirani once that I will direct only if he writes a script for me." Aamir then held him on his word. "In fact I also liked the script you have called Baraf," Mansoor told Aamir, "But I think only you (Aamir) can do justice to it as a director." Mansoor however assured people that he will make something soon.