Akshay Kumar is known to perform some insane stunts. The actor, popularly known as Khiladi Kumar, was the host of Khatron Ke Khiladi for many years before Rohit Shetty took over. Now, both the actor and director will be coming together with a cop drama Sooryavanshi and fans are super excited about that. But, before that, Akshay Kumar appeared on the season finale of Khatron Ke Khiladi this past weekend and showcased some insane stunts. 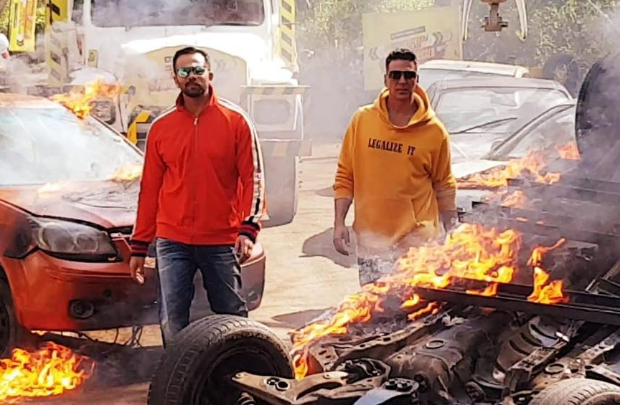 This past weekend, the finale aired and saw Punit Pathak taking home the trophy. But, before the winner was announced, special guest Akshay Kumar received a challenge from his Sooryavanshi director Rohit Shetty to perform deadly stunts to take away the winning trophy. And as always, Akshay did not disappoint. From being chased by a truck to cars flying in the air to Akshay jumping from one place to another, it was a power-packed sequence to watch.

After successful cop films with Ajay Devgn and Ranveer Singh – Singham franchise and Simmba – the filmmaker is ready for yet another cop drama with Sooryavanshi starring Akshay Kumar. The character was first introduced in the post-credits scene of Simmba when Ajay’s character Bajirao Singham was seen interacting with Akshay Kumar on phone. Since then, the excitement for the film is too high.

ALSO READ: Akshay Kumar teams up with Rohit Shetty yet again after Sooryavanshi (details inside)