Kartik Aaryan shot to fame from his debut Pyaar Ka Punchnama itself. The audience fell in love with him all over again with his last hit, Sonu Ke Titu Ki Sweety. With multiple fashion brands approaching him and killing it on the ramp as Manish Malhotra’s showstopper with Kareena Kapoor Khan, Kartik is receiving a lot of appreciation. With all of this going on, the Punchnama baby recently had the opportunity to meet the Prime Minister of India, Narendra Modi. Along with other Bollywood celebs, which included Karan Johar, Ranbir Kapoor, Alia Bhatt and Vicky Kaushal, they had a tête-à-tête with the honourable man. 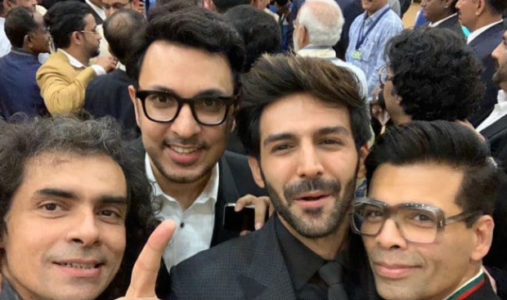 The bunch took KJo’s private jet and had a blast altogether. What grabbed the most attention was their ‘backfie’. The picture included director Imtiaz Ali, Karan Johar, and Dinesh Vijan. This innovative picture of theirs was even acknowledged by the PM himself. Check out the tweets exchanged between the PM and Kartik.

Not losers but Rockstars!

No selfie Jab We Met but there will always be another occasion. :) https://t.co/1Ud7D5jIvd

Speaking about the backfie, Kartik opened up about how nervous they were to ask him for a selfie. The bunch thought it would be inappropriate to ask him for a selfie, so instead, they decided to go for the backfie. After posting the picture and captioning it as ‘losers’ backfie’, they were scared that it will be taken in a wrong way. They were tensed about it going haywire and hoping that it would not backfire. The picture was taken in good faith and they did not mean to offend anyone with their witty caption. However, luck favoured them when the PM himself replied to their picture addressing them as rockstars.

On the professional front, Kartik is going to be seen in Luka Chuppi opposite Kriti Sanon and we can’t wait to see their fun-filled rollercoaster ride of a film.