Rajpal Yadav as Chota Pandit has been one of the iconic characters since the prequel Bhool Bhulaiyaa hit the big screens in 2007. He reprised the character once again in the sequel despite the film being a completely different one compared to its predecessor. And it seems while shooting for the same, he formed a great bond with the new leading man of the film Kartik Aaryan. And their bond was quite visible as they posed together for the media at the success bash of Bhool Bhulaiyaa 2. 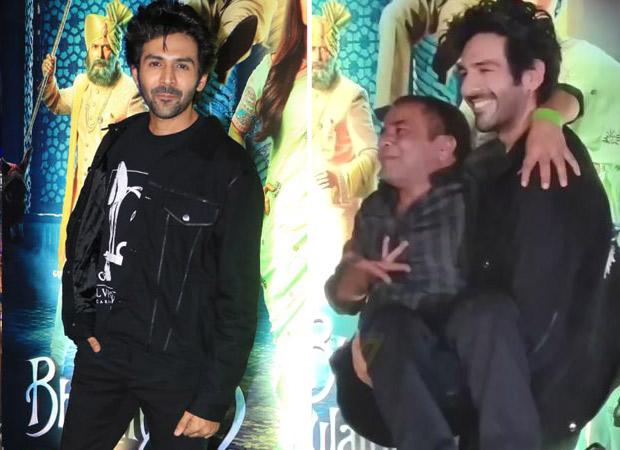 Kartik Aaryan picking up Rajpal Yadav at the Bhool Bhulaiyaa 2 success bash is what bro bonds are made of!

For the uninitiated, Bhool Bhulaiyaa 2 turned out to be one of the biggest Bollywood hits of 2022 with the film crossing Rs. 100 crore at the box office. The makers of the film recently planned a success bash for the same which was attended by almost the entire cast of the film including leading man Kartik Aaryan, Rajpal Yadav, Tabu, Milind Gunaji, director Anees Bazmee among others. During the same while posing for the paparazzi, Kartik ended up picking up Rajpal Yadav. Rajpal’s comic timing off screen too, resulted in leaving everyone in splits.

On the other hand fans continue to call it as ‘cute’ and even appreciated the bromance between both the actors. “Kartik Aryan is so original nd without Rajpal film was incomplete,” read one of the comments. “Rajpal Yadav is the star of the film”, said another.

While Rajpal Yadav attended the bash with his wife, the party also saw guests like Ronit Roy and his wife Neelam, Jackky Bhagnani who walked in hand-in-hand with girlfriend Rakul Preet Singh. However, the leading lady of the film Kiara Advani was missing from the bash. The actress is currently in the midst of promoting her next release, Jugjugg Jeeyo, a Dharma production venture that also stars Varun Dhawan, Anil Kapoor and Neetu Kapoor in lead roles. Speaking about Bhool Bhulaiyaa 2, the film released on May 20, 2022 to a massive advance opening.