Luka Chuppi star Kartik Aaryan rang in his father’s birthday in the most special way. Despite being busy with film commitments, the actor pushed his flight a few hours later and made sure he’s present for his father’s birthday. Aaryan stepped out for dinner and treated his dad and his family to their favourite cuisine. While Kartik was ready to surprise him with a special birthday gift, his father asked for something specific, which surely surprised the actor in turn. 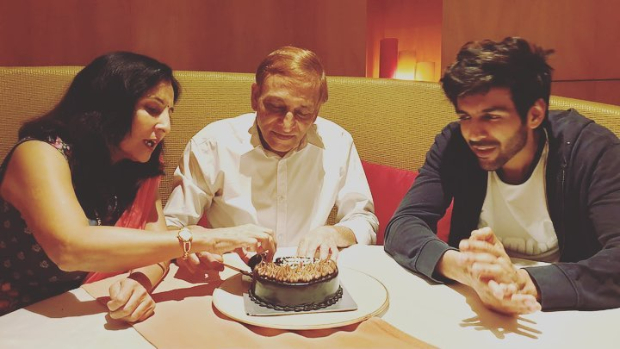 Well according to sources close to the actor, it’s said that Kartik’s father asked his star-son to stay away from his phone whenever he’s with his family. He hates how the current generation has turned out to be such a phone addict and with Kartik’s growing stardom, it’s almost impossible for him to stay away from his phone. But to make his dad happy on his birthday, Aaryan agreed to his condition and surely stayed away from the buzzing rings.

A friend close to the actor says, “Kartik is very close to his family and he owes his parents a lot. To have a great dinner, he made sure he leaves the city on Tuesday afternoon instead of Monday night after requesting Imtiaz Ali. Obviously he would do anything to be by his father’s side. But when his father asked him to be away from his phone whenever he’s with his family as a birthday gift, Kartik was surprised but he instantly said yes to him. Infact from that very, moment, Aaryan stayed away from his phone. His dad is a very humble man and no matter what success Kartik has achieved, he likes to treat his son as a normal person and not give him any starry airs at home. That’s the reason you will always see Kartik to be very humble, because he’s brought up this way and nothing will change.” Now that’s really heart-warming to know.

Kartik Aaryan is giving his heart and soul for Imtiaz Ali’s next film. He will be seen opposite Sara Ali Khan – who’s the nation’s latest sweetheart. After watching several video clips and photos from the Delhi sets, one can say that their chemistry will set our screens on fire. The film is set for Valentine's Day 2019 release.