Deepika Padukone’s beauty and popularity is unmatched, both on Indian and international grounds. While back home she has had the most successful year with her movie Padmaavat making record breaking business, she has been creating ripples on the international soils too. She made two terrific appearances at the Met Gala and Cannes recently and all her outings at these dos were much appreciated. At Met Gala, she was seen wearing a red Prabal Gurung gown aligning with the theme Heavenly Bodies: Fashion and the Catholic Imagination. She turned into a scarlet beauty with Atelier Prabal Gurung cardinal strapless gown with hand-draped silk gazar sculptural shoulder bloom and side draped chapel train with Tasaki Atelier embellishments. Other than looking DROP DEAD gorgeous, she also hung out with pretty cool people from Hollywood too. 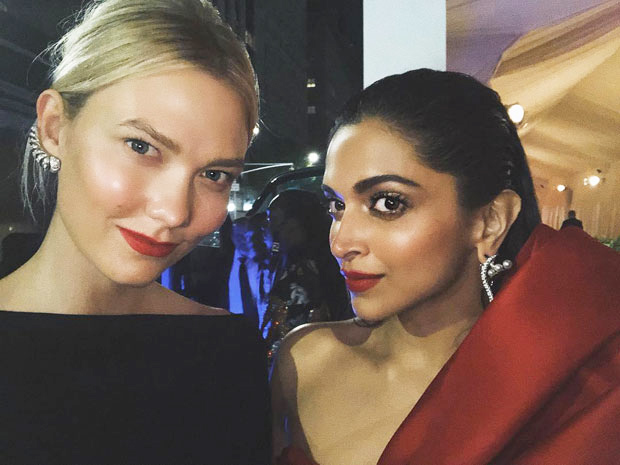 The Padmaavat actress chilled with Hailee Steinfeld and Diane Kruger. DP was seen matching her red lips with the international superstar Karlie Kloss who later poster a picture with her on Insta. She captioned it as, “So much love for this lady @deepikapadukone." Looks like Deepika has made a lasting impression on her.

So much love for this lady???????? @deepikapadukone

On the professional front, DP has not signed anything post Padmaavat. She was supposed to Vishal Bharadwaj’s gangster biopic on Mumbai mafia queen Sapna Didi but since her co-star Irrfan Khan fell ill, the project has been indefinitely postponed. There is a conjecture that she will be seen next in a superhero flick with oodles of action scenes produced by Fox Star Studios. But there is no confirmation on this front as of now. But we hope to see her soon on screen!