Kareena Kapoor Khan definitely seems to be enjoying her new role as the judge of the reality show Dance India Dance 7. Despite the fact that she is currently in London shooting for Angrezi Medium, the actress has been taking time out for shoots and has been making frequent trips to the city to focus on her television commitment. While we will get to see Karisma Kapoor in the forthcoming episode, Kareena, who has shot for other episodes, is seen having a gala time on the sets of the dance reality show. The actress even dances to some of her popular numbers like ‘Mauja Hi Mauja’ and the latest one is ‘Raat Ka Nasha’. 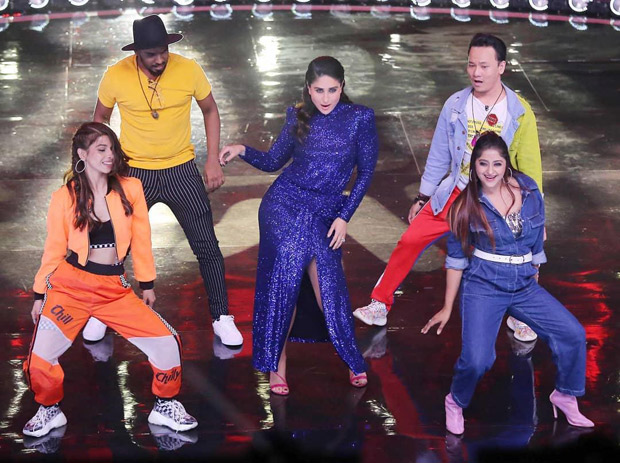 Kareena Kapoor Khan, who wore a shimmery blue gown for one of the episodes of Dance India Dance 7, took the stage along with other dancers and recreated one of her most sensuous numbers, ‘Raat Ka Nasha’ from the film Asoka. The photos of the actress dancing have definitely gone viral as the fan clubs of the actress have posted the said pictures on social media platforms like Instagram. Here’s a look at it:

On the other hand, Kareena Kapoor Khan also learnt a new classical form during the show. We hear that the actress was always keen on learning an Indian classical dance form and she was excited to dance to Odissi steps and learnt a bit about it during Dance India Dance 7. Coming to the show, besides the actress, Rapper Raftaar and choreographer Bosco Martis are also in the judging panel.

As for her films, Kareena is currently shooting for the role of a cop in Angrezi Medium that also stars Irrfan Khan and Radhika Madan. The actress will next be seen in Good News and later, in the period drama Takht. She is also expected to have signed Lal Singh Chaddha alongside Aamir Khan.