While husband Saif Ali Khan has been enjoying quality time with son Taimur Ali Khan in Maldives, Kareena Kapoor Khan is bonding with her family in London. Not too long ago, we had reported that the actress is busy with her work commitments and is currently shooting for next in the England capital. But it seems that her trip had perfect timing as her cousins Armaan and Aadar Jain as well as sister Karisma Kapoor were also present in the city. 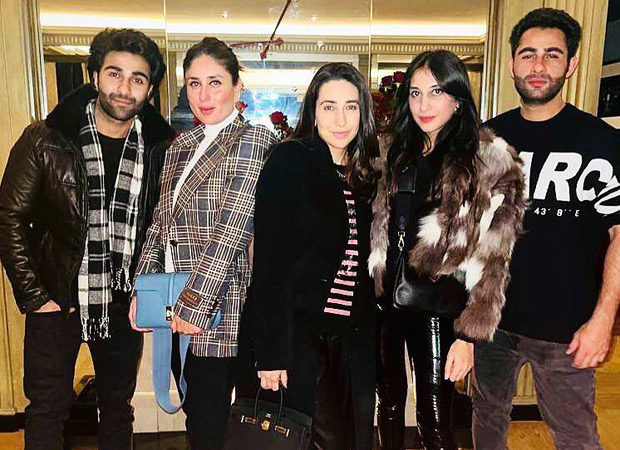 Aadar Jain has been sharing several photos from his recent trip to London on his social media whereas his reported girlfriend Tara Sutaria has been dropping comments on how much she misses him. On the other hand, Armaan Jain is currently in the England capital with wife Anissa Malhotra, who is a fashion designer by profession. The trio met up with Kareena Kapoor Khan who is shooting for the untitled Hansal Mehta film in the city. Accompanying them was also Lolo aka Karisma Kapoor.

And needless to say, the Kapoor kids were at their stylish best when they got together at the luxury hot Claridge in London. Aadar shared this special group photo on Instagram where they were all dressed up as per the chilly weather of the UK, which included trendy jackets and stylish boots.

On the work front, Kareena Kapoor Khan, who was last seen in Laal Singh Chaddha, has this Hansal Mehta film where she is expected to play the role of a cop. On the other hand, the actress will be seen playing the leading lady in the Sujoy Ghosh directorial Netflix film which is an adaptation of Devotion of Suspect X. Besides these two films, the actress will also be reuniting with Rhea Kapoor for a female centric drama featuring Tabu and Kriti Sanon.