Karan Johar, who welcomed his twins Yash and Roohi last year, celebrated their first birthday on Wednesday, February 8, 2018. It was a low key affair with close friends and their tiny tots. Kareena Kapoor Khan, Rani Mukerji, Shah Rukh Khan, Alia Bhatt were amongst some of the guests who attended the party.

The 'baby party' was a fun-filled affair for Karan Johar and his little ones. But, what was more interesting was seeing three leading ladies from different times coming together for a picture. Karan Johar shared a picture of Alia Bhatt, Rani Mukerji and Kareena Kapoor Khan who were at his party. 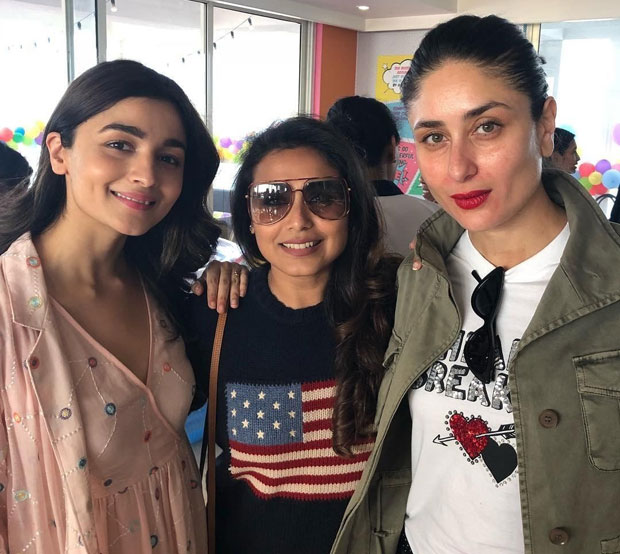 In the picture, Rani Mukerji was sporting casual look in a black tee and shades. Rani reunited with her Mujhse Dosti Karoge co-star Kareena Kapoor Khan who also kept it casual in a white tee and a jacket. Alia Bhatt, on the other hand, looked cute in a peach dress. Karan, who took to the picture, captioned it as, “#girlssquadgoals.”

Meanwhile, on the work front, Kareena Kapoor Khan will be next seen in Veere Di Wedding with Sonam Kapoor, Swara Bhaskar and Shikha Talsania. Directed by Shashanka Ghosh, the film is scheduled to release on June 1, 2018. Rani Mukerji is currently promoting her film Hichki which is scheduled for March 23, 2018. Alia Bhatt is currently filming Zoya Akhtar's Gully Boy with Ranveer Singh. She will also be starring Meghna Gulzar's Raazi and Ayan Mukerji's Brahmastra.

Also Read: Check out INSIDE pics and video from Karan Johar’s birthday party for Yash & Roohi!