Kannada superstar Kichcha Sudeep will be seen in Dabangg 3. But before getting into Bollywood in a full-fledged villain style, the actor seems to have been exploring small screen. The Kapil Sharma Show happily welcomed the Sandalwood actor who gained fame with Makkhi. Sudeep took to social media to share some glimpses from the TV show where he was the guest. 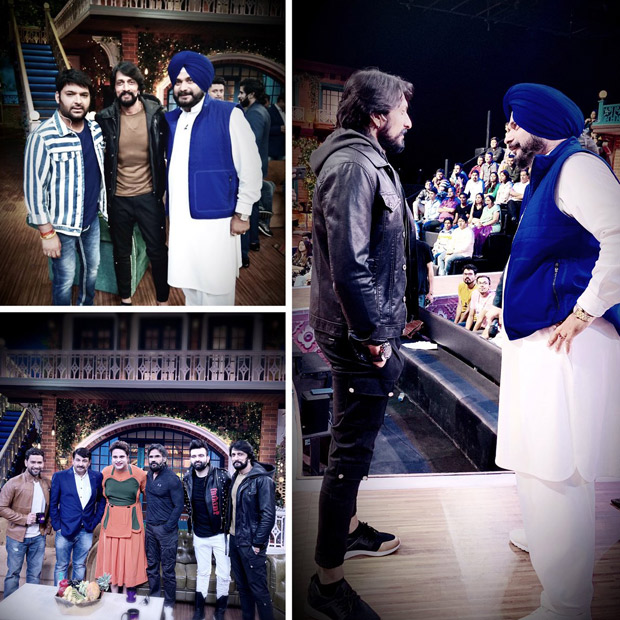 Kichcha Sudeep, for the first time, appeared on The Kapil Sharma Show, which recently kicked off the second season. The actor shared that experience on his Twitter handle wherein he posted three pictures along with the team of the show and also wrote in the caption saying, “Had a gala time on the #KapilSharmaShow .. Laughter was in abundance and I guess it’s rare that I have gotten t laugh this way.. thanks to each one for having us over n for the wonderful time. Thank u @KapilSharmaK9.”

Had a gala time on the #KapilSharmaShow .. Laughter was in abundance and I guess it’s rare that I have gotten t laugh this way.. thanks to each one for having us over n for the wonderful time. Thank u @KapilSharmaK9 ???????? pic.twitter.com/qWYIJh1V9E

The Kapil Sharma Show has featured many celebrities in the past but this was the first time that they had the Sandalwood superstar on their show. And it seems that Kapil too had a blast. The two of them had a small chat on Twitter, where Kapil too responded to the tweet posted by Sudeep. The man, who is known for his comic timing, seems to be quite impressed with the Kannada film star’s one liners.

Thank u so much for coming Sir .. ur one liners were mind blowing .. people will remember this episode for years ???? regards https://t.co/65feQtcrVi

Kichcha Sudeep will next be seen in Pailwaan and his looks seem to have impressed everyone. Furthermore, he will also be featuring in a pivotal role in the magnum opus Sye Raa Narasimha Reddy starring Chiranjeevi. He will also be starring alongside Salman Khan for the first time in Dabangg 3.

Also Read: Dabangg 3: After Prakash Raj, another South actor to play antagonist in the Salman Khan film and it is none other than Makkhi fame Sudeep