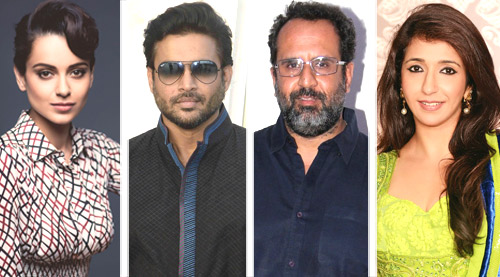 It has been close to 10 months since the release of Tanu Weds Manu Returns, and the film is still being talked about. Other than the fact that it managed to make more

than Rs. 150 crore just at the Indian Box Office, hence emerging as a Blockbuster, it also turned around the fortune of most who were associated with it. While Kangna is said to be demanding a fee

in double digits (and getting it), director Aanand L. Rai has moved to a different league altogether and could well have Shah Rukh Khan featuring in his next. As for producer Krishika Lulla, she is

continuing to diversify across different genres.

With the film continuing to enjoy a great recall value ever since first in the series - Tanu Weds Manu - was released in 2011, one eagerly looks forward to the escapades of both the loveable

characters in near future as well.

"It has to happen eventually," says an insider, "Unlike the numerous franchise affairs or the ones where just the protagonists take forward the journey (though in a different set up), Tanu Weds

Manu franchise is unique as it actually tells the story of two characters and what's happening in their lives. It is the toughest thing to do as these characters are already married, have gone

through their marital conflicts and are now back with each other. Even a third angle in the love triangle has been explored as well. It could well be the tale of what happens next with kids around,

but then that could be predictable."

Considering the fact that such plotline has already been explored in Shaadi Ke Side Effects (sequel to Pyaar Ke Side Effects, albeit with different characters and actors), one

expects Aanand L. Rai and team to think of something all the more innovative.

"Market demands though that the team does come back with a film," comments an industry veteran, "Such franchises, which have good entertainment quotient and are also meaningful, are hard to find.

This is the reason why when they work, they do so big time. Who would have thought that Tanu Weds Manu Returns would do four times the business of Tanu Weds Manu, and that too without

its budget escalating much. It was a win-win profit situation for all involved."

However, those who are investing money in the franchise aren't in any hurry to just grab the pot of gold yet, even though it is there for the taking.


Says Krishika, "The reason is simple; the story of third instalment of Tanu Weds Manu has to be far better than the second one. It is not a matter to worry about that a few years would pass

by before the next one comes. When the second part came, it was four years after the first part. The audience though hadn't forgotten either Tanu, Manu or the milieu that Aanand had created. They

still connected immediately with them. They waited for the second and got more than what they had bargained for. So if the third one is even better, I am sure they would indulge all over again. We

don't want to rush up anything till then."