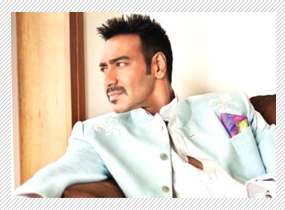 Son Of Sardaar which released on Diwali (November 13) has been doing well at the Box Office. However, the release was preceded by a long drawn out battle for screen space with the other Diwali release Jab Tak Hai Jaan. "It was very stressful. No one wants a controversy. It just gives you sleepless nights. What had to be done had to be done. I've said before that even if the theatres are less, but the audience should not be less," says Ajay about the fiasco that broke around the petition that his company had filed against YRF.

It was being said that as a mark of respect for Mr. Yash Chopra, Ajay should move the release of his film. "Some people did say that. Like everybody else my respect for Yash ji is not any less. Its business, I cannot kill myself. I had given the industry an option, I am willing to do that but its business, you give me space. Let everybody go ahead by two weeks. If the whole industry shifts by two weeks, I am ready to shift. Everybody backed out, so what does that say?"questions Ajay. When asked Ajay if filing the case helped him in anyway, he replied, "When we filed the case, we were 1000 screens less. It was because of the case that the pressure came on the other party and we got at least 400-500 screens more."

And here's a biggie. Is Ajay open to doing a film with Kajol and Shah Rukh Khan? "I'm okay with everything as long as there is a film where the script is liked by all three of us and all three of us have substantial roles that we want to do in the film, then why not," Ajay said.

All this and more in Ajay Devgn's Bollywood Hungama exclusive interview...coming soon!