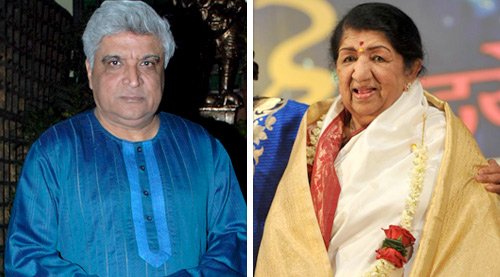 On her 85th birthday the most precious gift for the indomitable Lata Mangeshkar came from the poet par excellence Javed Akhtar.


He penned a beautiful poem for Lataji.


A self-confessed Lata bhakt Javed Saab says, "Lataji is the most defining emblem of Indian cinema. Normally artistes strive for perfection. Only Lata Mangeshkar has achieved it. There're no boundaries to her excellence and reach."


The poet feels Hindi film songs define the Indian identity the world over. "You know, Hindi film music is so deeply rooted to our life and cultureâ€¦ When I go to foreign countries and to very exclusive gatherings of NRIs who are deeply conscious of their status and position, they invariably lose their inhibitions once everyone starts singing songs. More than cinema, I think Indians all over the world are bonded by film songs. Film music outlives cinema. Today we remember Lataji's songs. But not the films they belong to."


Javed Saab feels it's impossible to assess the true measure of Lataji's contribution to Indian cinema. "No matter how much we revere Lataji, we cannot even begin to evaluate her contribution. Her body of work is beyond awesome. Listen to the nostalgia channel on the FM radio channels. 80 percent of the songs are by Lataji. She has proved perfection is possible in this imperfect world."


The poet compares Lataji to the greatest artistes of the world. "Sometimes I think people like Lataji, Ghalib, Beethoven and Shakespeare are far removed from the normal chain of human civilization. If they were just role models how come no one was able to achieve an iota of their perfection? They are intruders of civilization who come as reminders of the rule of mediocrity that prevails. Lataji belongs to a different league."


Javed Saab recalls an illustrative anecdote about Lataji that truly defines the voice of India. "I'll tell you an incident that Pandit Jasraj narrated to me. In the 1950s he was in Amritsar when he went to meet the classical genius Ustad Bade Ghulam Ali Khan who was his God. When Pandit Jasraj got chatting Bade Ghulam Ali Saab suddenly told the young man to keep quiet. He heard the sound of the young Lata Mangeshkar singing 'Yeh Zindagi Usski Ki Hai' from Anarkali. Bade Ghulam Ali Khan was enraptured. He finally said, 'Kambhakt, kabhi besuri hoti hi nahin.' That remark had the affection of a father and the envy of an artist."


Javed Saab ends his emotional encomium with a Lata-centric homage from a musicologist. "I remember meeting a music scholar Chaman Bharti in Bhopal. I asked him what he found so special about Lata Mangeshkar. He explained to me, 'If you take a strand of hair and put it under a microscope here would be a center to that magnified view of the strand of hair. Sur kitna bhi bareeq ho usska jo exact center hai wahan Lata Mangeshkar gaati hai."


Reacting to Javed Saab's poem and to his praise Lataji says, "What can I say? I am overwhelmed. Javed Saab has always been very generous in his praise for me. I rate him very highly as a person and a poet. I am proud to say I sang his first film lyrics in Silsila. He has also done a marathon interview with me for television which I rate as among my most illuminating conversations. I will treasure the poem for as long as I live."