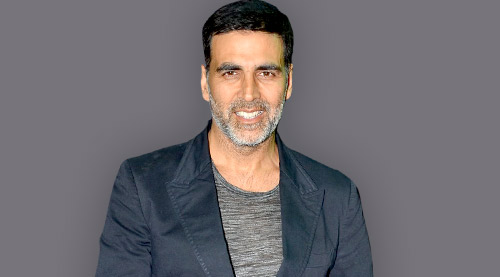 Akshay Kumar had 4 releases last year, and he's already looking at the first release of 2016. Airlift, a political drama set in Kuwait during Saddam Husain's invasion is a film Akshay rightly proud of. Most of the other A-list actors of Bollywood today would hesitate in touching something so controversial and ...well... non-filmy. Akshay dares to be different, and yet finds space to do what he is most loved for, namely goofy comedies. Subhash K Jha chats with Bollywood's star-actor with the most chutzpah.

2015 saw the releases of four of your films Baby, Gabbar Is Back, Brothers & Singh Is Bliing, with Airlift round the corner... Your comments on the year that was?
It felt like a really long year, there's no denying it, but then again releasing four films within 12 months takes its toll on every inch of you (laughs).

So a long holiday from work perhaps?
Never! I still wouldn't have it any other way!! My range of films in 2015 are what I've loved the most about the year, each and every one of my directors has kept me on my toes, be it Neeraj Pandey in Baby where he wanted me to exercise absolute discipline in the big outdoor action scenes or even indoors while manhandling some corrupt elements. Then there was the director Krish in Gabbar Is Back.I loved doing that as much as Baby.

It was a while saw a hero doing the vigilante act?
Krish really brought the vigilante out in me. I felt bigger and bolder than ever. Ha ha. Then the MMA (mixed martial arts) experience of a lifetime created by Karan Malhotra. Let me tell you, my body is still recovering from that one.

Singh Is Bliing saw you do the goofy comic thing again?
I love making people laugh. In Singh is Bliing my director Prabhu Dheva finally let the girls rule the roost while I played with huge Lion! What can I say; it was an eventful and extremely versatile yet physically demanding year. I'm a lucky man to still be living my dream after 25 years!

Which of these films did you enjoy doing the most and which ones gave you maximum satisfaction as an actor, and why?
Enjoy, would have to be Singh Is Bliing of course, purely because it was the most pain-free carefree happy-go-lucky film of the year. But my biggest achievement last year would have to be Brothers.

Why?
This film took everything out of me. I gave so much mentally and physically for this film. I trained bigger and harder than I ever had to in my twenties. I prepared and put my body through things I didn't know I could achieve at my age.

Why did you go through so much physical strain?
The sheer physical labour to put myself through what I did was to purely inspire the younger generations of India, life doesn't have to start and end in a text book. Martial arts is an incredible discipline to study as well. The fight sequences in Brothers make me proud. They are something I will carry proudly on my back for many many years to come.

Which has been your most satisfying performance in recent times?
Baby was my Baby!! Neeraj has a knack of reinventing every step you make, even if it's walking the streets, he will make you perform like you've never walked before, and I love that about him.

2016 starts for you with Airlift. The film looks as real and raw as Baby, if not more. Are you again going to balance the real with the escapist films in 2016?
I really do like my nitty gritty films, there's something so honest about them, they make you feel like you are doing something real and right for a change, rather than just being a money making movie-making jack in the box. With raw cinema it just takes you to another space entirely, you feel a lot more connected to your character than in a commercial film.

So the raw-real are more challenging than the masala films?
No. Don't get me wrong I still love to do my commercial films. But I've reached that stage in my career where I want to offer something more. My films like Baby, Airlift, and Holiday all bring a certain purpose to my days, to my work, to how I feel as an actor. I'm hoping not only 2016 will bring me more such cinema, but also the future.

Airlift is obviously a film close to your heart. Please tell me about your character and the film.
Ranjit Katyal, a man that had it all, a rich successful businessman with a prosperous family, the world at his feet, till one fateful night when nothing is ever the same again. My character is a man of his word, when war struck Kuwait where he resides, he felt it his duty to not only get his family back home safe, but also evacuate all the Indian families that were in the same horrendous situation he was in.

You have always gravitated towards playing idealistic heroes like the one in Dhadkan and Aetraaz?
Yes, what I like about my character in Airlift is that he couldn't just walk away from the crisis with his family into safety. He had to help himself; thousands were in just as much danger as he was, so he felt it his duty to rescue his own people from the war that had rained down upon them all so suddenly, a rescue that turned into the biggest air evacuation mission of all time. This is a story about a man who didn't know how to give up.

Why have we never heard of this man?
That's the thing which attracted me to Ranjit Katyal. He not only saved thousands of lives, he came home and no-one even truly thanked him. Ranjit Katyal should have been a national hero, yet somehow his efforts went unnoticed. This is my honest attempt at bringing respect to the man many families owe their lives to, a man whose name we should all know.

In 2015 you worked with new leading ladies like Amy Jackson and Jacqueline Fernandes. It's now Nimrat Kaur in Airlift. What was Nimrat like as a co-star?
As a co-star for about 3 days she was a very serious, well-spoken humble. She was on a mission to make a film and make it well. So of course I had to make it my honourable duty to break her defenses.

What do you mean?
I mean I forced her to see another side to making films. She's a wonderful actress and human being, but she didn't realize you can enjoy your work even when your work is about bloodshed and heartache. Now I can honestly say, she's been given my magic touch of humour, the best medicine in even the worst of circumstances and she has taken my medication for fun-shooting like a true lady and embraced a new found filming experience, she has officially been broken in.

On your home front, your wife Twinkle blossomed into an author?
My wife is proving to the World right now just what an extraordinary woman she really is. Tina is an incredible writer and poet in my eyes; she throws words together like I throw a cricket ball, which is powerfully with such ease. I couldn't be prouder, when the person that's been holding you together for so many years gets to revel in her own individual; limelight, it's more than satisfying, it's inspiring. My wife, the life juggler, wow!

Would you like your children Aarav and Nitara to become actors, if they choose to be?
Personally my children can become whatever they want to be. I'd never be the type of parent who pushes his children in a direction they don't want to go in. It's my life-long passion to never lose my children's love. If I pushed them, I'd only be pushing them away, so instead I just want to hold them closely and follow behind them quietly. Currently my son Aarav is engrossed with writing his own school play and my daughter just wants to fly like Hanumanji. I have no worries about them being driven, but I'll always be in the background steering them if they ever do get lost in the ocean of opportunities...

Your closing thoughts?
My thoughts are only of gratitude. I can't ask for more in life. I will mostly definitely strive for more, for my fans and of course for my family, but I ask for nothing. I really do just want to give thanks. I have the greatest support-system to help me help as many as I can, 2016 is going to be another year of giving, in whatever way I can.