Last Updated 22.09.2020 | 10:12 AM IST
feedback language
follow us on
Home » News » Bollywood Features News » Bollywood News “I’ve not wept so much for anyone since my parents passed away,” says Asha Parekh on the passing of her BFF Shammi

Shammi Aunty,as she was universally known in the film industry, passed away quietly on Tuesday morning at the age of 89. She had no relatives except an adopted son Iqbal Rizvi who stayed close by but not in the same apartment as his foster-mother. The end came alone. Shammi Aunty, born Nargis Rabadi who lost her only sister the famous designer Mani Rabadi a few years ago, had become rapidly immovable and forgetful. Her best friend for more than 50 years Asha Parekh is barely able to contain her sobs. 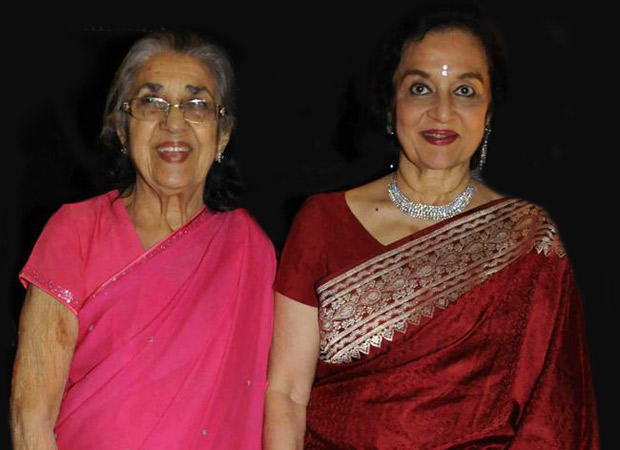 “I haven’t wept so much since I lost my parents. I called her Shammi Aunty. She was much older than me. But we were best friends for years. She shared everything with me. It was a natural-born trait in her to win people’s confidence. She was close to many actresses who poured their heart out to her. With me it was special. We had spent decades together. She was my closest friend confidante and after my parents’ death, a guardian angel. Now she’s gone,” Ashaji breaks down while she tries to remember the good memories with the ever-jovial Shammi who made so many people laugh on and off screen

Rakhee Gulzar who was also very close to Shammi Aunty (and had in fact played the lead in Pighalta Aasman , the film that Shammi Aunty produced in 1985 with Raakhee and Shashi Kapoor in the lead) said to me, “Shammi Aunty taught me how to laugh out. To not hold back my laughter. You see as girls we were always taught not to laugh loudly. Shammi Aunty made me realize there was nothing unwomanly about loud laughter. She made my happiness come out of my throat.”

In 1970 Shammi Aunty married filmmaker Sultan Ahmed. She described it as the biggest mistake of her life. The two parted acrimoniously. Recalls Asha Parekh. “I did Sultan Ahmed Saab’s Heera only because of Shammi Aunty. The laughter stopped when she was about 80. The last 8-9 years of Shammi Aunty’s life were miserable. Her health was failing. And she often she had no domestic help. She would come and stay with me. We couldn’t share as much laughter as we did earlier since her hearing faculties were affected.”

Born in 1929 into a family of Parsi priests, Shammi whose real name was Nargis began her career in films in 1949 with a film called Ustad Pedro with Sheikh Mukhtar who was then quite a name. It was a hit. And there was no looking back. Shammi went on to do all kinds of roles.

When her role on K Asif’s Masafirkhana as a comedienne clicked she got typecast in ‘funny girl’ roles. “Mujhe comedy mein bada maza aata hai. Main hoon hi waisi,” she once told me over dinner at Asha Parekh’s place where I’d often find her every time I visited. “I want to continue acting. It’s the only thing I know how to do. But movie offers had stopped coming for a while. I was doing television. But that too dwindled lately. So I was sitting idle. At my age to be workless is to be worthless. Lekin main aaj tak kabhi kissi se kaam maange nahin gayi (I never went to anyone to ask for work). Why should I do so now? I am happy getting what comes to me. And grateful to God I still get work. He has been very kind to me. Otherwise why would I still be getting work? It is unimaginable for me to be not working. Boman Irani once asked me how many films I had done. I had no clue! Recently someone Googled on me and found out I had done nearly 200 films. I was amazed. When did I do all these films? Time just flew by!”

Her last film was Bela Segal (Sanjay Bhansali’s sister)’s Shirin Farhad Ki Toh Nikal Padi. I will always remember Shammi Aunty as the irresistibly friendly soul who always came to meet me at Asha Parekh’s place, and who never forgot to call and sing Happy Birthday to me every year until she grew too old to remember my birthdays.

I did try calling her after her sister passed away. She couldn’t identify me.