Karisma Kapoor sure knows how to party! On the occasion of her birthday today, the Kapoors and her closest friend Natasha Poonawalla planned a special lunch bonanza for her at fancy Mayfair in London. And guess who joined them? Kareena's Veere Di Wedding co-star, Sonam Kapoor and her husband Anand Ahuja who owns a house in London. Kareena Kapoor, Saif Ali Khan, Karisma Kapoor, Sonam Kapoor, Natasha Poonawalla gathered to have a longish lunch filled with fun, food and music to ring in Lolo's special day. 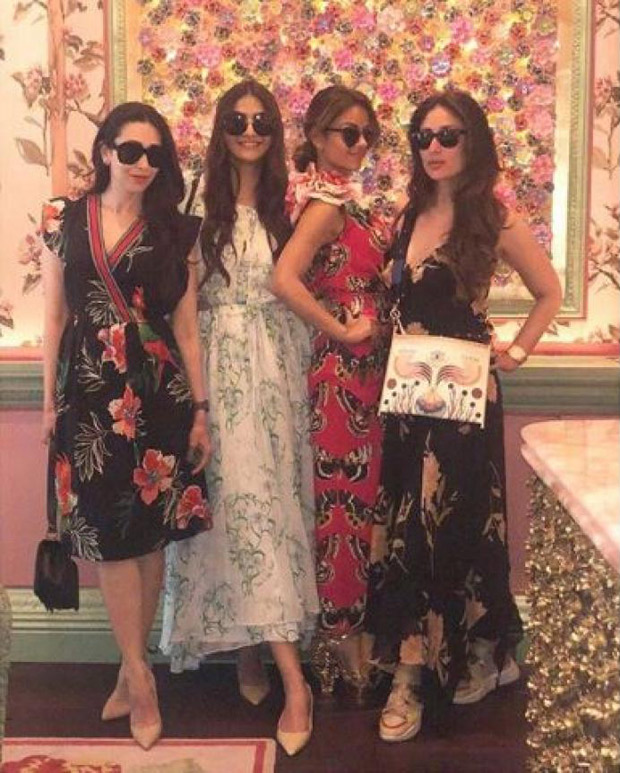 We hear that the Kapoor sisters have flown in their daddy dearest Randhir Kapoor to London and together they shall go to Gstaad and Interlaken in Switzerland. It is the sisters’ gift to him! Aww, so cute na. Earlier last week, Shashi Kapoor’s son Kunal had also joined them for special lunch. Bebo who has taken a break from work is enjoying completely with her family and spending all the time with her bundle of joy, Tiamur Ali Khan!

Karisma too is happy and secure in her personal life and recently her dad Randhir Kapoor told media that she wants to concentrate on raising her two kids Samaira and Kiaan Raj Kapoor and is not very keen on starting a family all over again. She has been linked with Sandeep Toshniwal in past. Check out Bebo’s birthday hoopla right here.

Also Read: Karisma Kapoor and Kareena Kapoor Khan to come together for their first live appearance