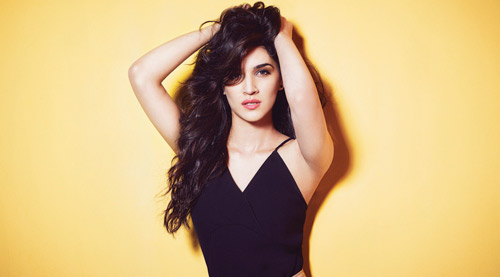 "I will be really happy if that is true. There is nothing that I can comment on it as of now," said gorgeous Kriti Sanon on the rumours that Salman Khan is keen on having her on board opposite him in Sultan. Sanon is one of the most sought after youngsters today. In a free-wheeling video interview with Faridoon Shahryar, Kriti explained the reasons why she couldn't be a part of Akshay Kumar's Singh Is Bliing and why she's super excited about working with Shahrukh Khan and Kajol. She also speaks about her Dilwale co star Varun Dhawan who recently called her a Swan.

You are working with Shah Rukh Khan and Kajol so early on in your career in Dilwale. Varun Dhawan is being labeled as the new superstar. How has been the journey so far?

The journey has been very good. I'm dying to work with Shah Rukh sir and Kajol maa'm. We haven't shot together yet. There is a lot to be done. I am really looking forward to it because it is going to be one long schedule and we shall probably finish everything that's pending. It is a December release, Christmas; I really hope it works out. I'm very excited.

In a recent interview with me, Varun Dhawan called you a Swan. He seems to be very excited about you being his co star.

I saw that interview. He called me a big actress because of my height. It is nice to work with a sweet person. He doesn't have any attitude. He has done so well. All his five films have been major hits. He doesn't have that attitude that hey I'm Varun Dhawan and you're just one film old. He has great energy to him. He is so chilled out. He has that constant energy and he transfers that to you.

What really happened with Singh Is Bliing? Did you opt out of it?

I didn't opt out of Singh is Bliing. It was a mutual decision. I was really excited about that film, I was working hard for it, and I was taking classes, training also. But that film was getting pushed due to certain reasons. Every film has a destiny. Finally when it was starting I had signed Dilwale and it was starting at the same time. Akshay sir is super busy. It is always very difficult to go around someone else's dates when you have such big stars. I believe whatever you do you should give it 100% and me and the producer Ashvini Yardi we mutually decided that it is not going to work out. Both films had their release dates set. We mutually decided that we should not do it.

There are too many rumours on Sultan. It is being said that Salman Khan is keen to have you on board opposite him.

I will be really happy if that is true. There is nothing that I can comment on it as of now.

Have you been approached for Sultan?

No I have not been approached. There is nothing that I can comment on it as of now. I think you should talk about the films that you've signed. Right now Dilwale is the film that I've signed and there's nothing post that, that I've signed.