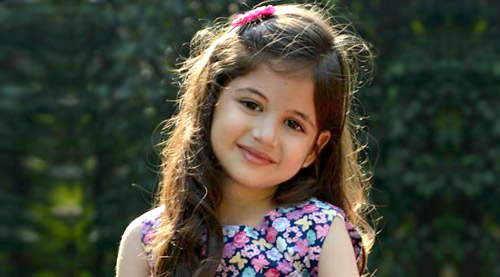 Like all children, she is what she is. Sans adulthood, there is no affectation-and you get what you see. The bundle of joy named Harshali Malhotra-or Shahida, as she is known to the world by her character's name in her debut film, Bajrangi Bhaijaan-is a part-precocious kid who is extraordinarily perceptive and yet so charmingly innocent.

In between chatting up, she prances around the venue, crawls quickly under a conference table, and briskly orders the PR team's girl with whom she has developed a bond and a few other girls from the media to join her under the table! She comes out only when we quip, "Salman uncle has just arrived!"

Harshali nicknames two scribes, whose names she hears wrongly, as "Canteen" and "Jam". She then declares that she will only talk to them, and strikes a 'crossed off' sign to everyone else, saying that she will not entertain any other questions! She then modifies her stance: "Aap sab line mein pooncho!" she says, firmly.

Her answers hint at a pro: "I did not understand what you ask!" she says, when an Urdu word is used in the question: "Who praised you the most for your work?" The query is suitably rephrased and out comes the prompt reply: "Kabir uncle (director Kabir Khan)!"

All of seven years old, Harshali hails from a Delhi family now settled in a distant suburb of Mumbai, and has been facing the camera since the age of 21 months! Her mother, Kajal Malhotra, recalls keeping her away from shoots for a couple of years before Bajrangi Bhaijaan happened. Till one day Harshali asked, "Why don't they call me? Kya main shoot acchi nahin kar paati?"

Yes, the kid's ambitious too. The Malhotras barely watch movies, and visits to movie halls are rarer still. "But when we went for a theatre once, Harshali said that she wanted to work on that kind of screen too!" recalls her mother. "Today, destiny has granted Harshali that wish, and has brought us to Mumbai." Of course, the moment Harshali crosses the fifth standard, she will be completely concentrating on studies till she finishes her academics, says Kajal decisively.

So how did it all begin? A casual visit to a store chain called Mom & Me led to Harshali's picture being taken, when she was less than two years old, for a store contest. Harshali won, and became the face of their ad campaigns, and was soon lapped up for other ads. Soon, she did a few serials as well. In 2014, she was signed for a small role in Sooraj Barjatya's Prem Ratan Dhan Paayo, but she was to shoot for it some months later.

Mukesh Chhabra, the casting ace, then cast her in this pivotal role of Shahida, so her mother approached Salman Khan and Kabir Khan to persuade Sooraj to take someone else, as a post-Bajrangi Bhaijaan small role could harm Harshali's interests. She is grateful that Harshali was released from the contract.


Interestingly, Harshali hates auditions. Says her mother, "She tells me that she will do anything that she is told to do, but does not want to give auditions. And Mukesh Chhabra's team just let her be, conversing with her, watching her body language and doing workshops. Before they finalized her, Kabir and Mukesh took her to meet Salman Khan, and for three days, Harshali was so super-excited that she seemed to go crazy! She's been Salman's fan since she watched Kick!"

Ask Harshali about meeting and working with Salman, and she admits, "Bahut mazaa aaya!" She loved playing with him in-between shots, especially with snowballs, and sharing "a lot of chicken" with him, especially during the 'Chicken Kuk-Doo-Koo' song shoot. And yes, she would call him "Salman mama!" she announces. Did she address him ever as Bajrangi uncle? A vehement shake of the head follows.

Harshali also got along famously with Kareena Kapoor Khan, Nawazuddin Siddiqui and Kabir Khan's daughter Saira. "Saira never did any shooting. She would just come and go, come and go!" she declares with expressive gestures of her hands. But her favourite among them all was Kabir-uncle again.

About missing classes, her mother reveals that though her school authorities were very cooperative, little Harshali was smart enough not to let them know exactly which movie she was doing and with whom! "Some of the staff would try to find out from her, but she would just say, 'Sorry! Not allowed!'" laughs her mother.

Ask Harshali whether she prefers shooting or studies, and she smiles and looks at her mother! "I know she loves shooting more!" her mother laughs. Harshali has yet to return to school after the film's Friday release, and when we enquire whether she will show her film to her friends, she stoutly retorts, "Nahin! Woh dekhne jaayenge!"

Now, that's a pro and a smart businesswoman already. And we forgot to mention that her favourite subject is Mathematics!