An understated fashion force, Karan Johar embarks on a path that most men in tinsel town shy from. His style arsenal refuses to fit into the regular mould and comprises all things modish, quirky and zany. Sprucing up and doing it like nobody else would seem to be his thriving style mantra. He even notches it further by looking uber-comfortable and relies on accessories to do the rest of the talking. His co-conspirator in this rare fluency of fashion is the fashion stylist, Nikita Jaisinghani as the duo spruce up a storm every time there is an appearance on the anvil. Last year, IIFA 2017 saw Karan Johar host the award show in addition to pulling off a style coupe of sorts with a heady mix of sharp suits, smart and colourful casuals and a whole lot of jackets. A testimony to his glorious fashion arsenal was when he turned showstopper for the eclectic designer duo, Falguni and Shane Peacock for the Lakme Fashion Week Summer/Resort 2018 earlier this year. This year too, Karan Johar is all set to dazzle at IIFA 2018, hosting the awards night with Riteish Deshmukh. Bringing his usual flair of elegance with him on the green carpet of the musical extravaganza, IIFA Rocks 2018, Karan made a poignant point in the brightest bubble gum pink!

Karan Johar dabbles it all with an enviable penchant - movie productions, direction, hosting of his frivolous talk show, Koffee With Karan and debatable acting skills (Bombay Velvet and Welcome to New York). A doting father to adorable munchkins, daughter Roohi and son Yash, Karan is also the quintessential Mr. Congeniality of tinsel town, known for those lavish parties attended by the who’s who of tinsel town! Without further ado, steal a glance at Karan’s green carpet style. 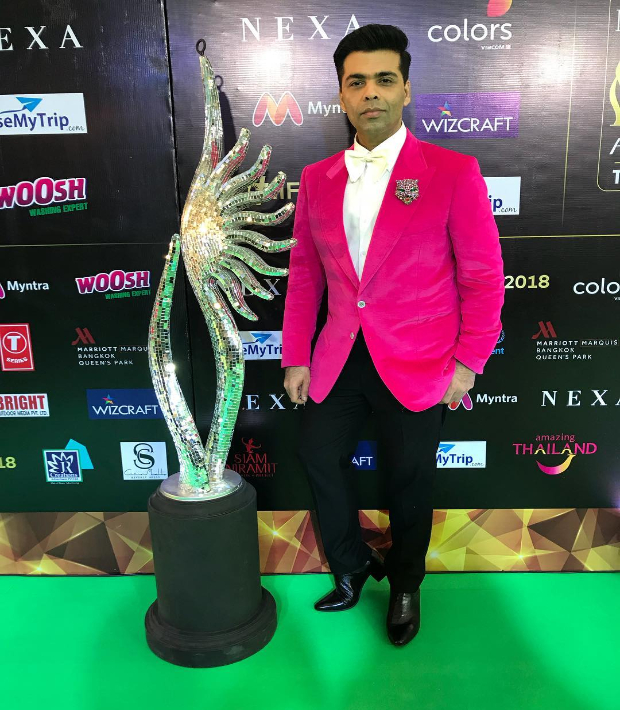 Karan sported a monochrome look of a white shirt, black formal pants and a white bow-tie. He added a bit of drama with a hot pink Gucci blazer and rounded out the affair with well-groomed mane and formal shoes. 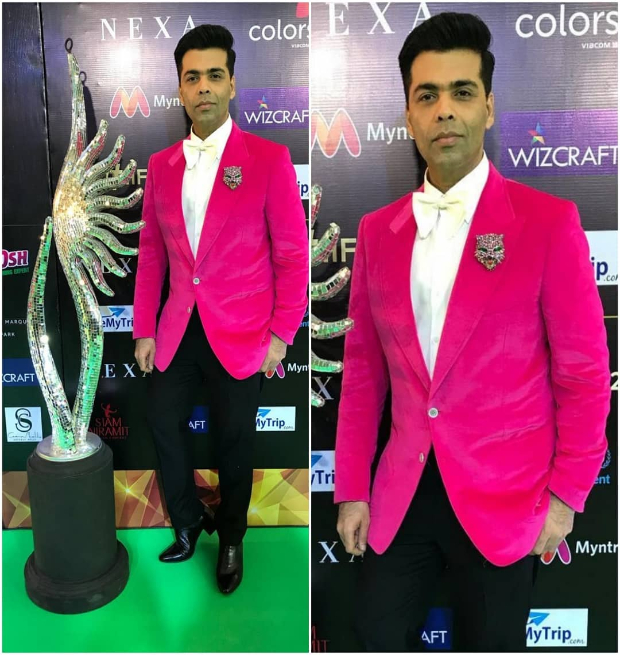 Things are never dull when Karan Johar is around! He spruces up the vibe with his effervescent take on fashion, effectively plugging drama into his personal sense of style play. When most men in tinsel town (except Ranveer Singh, of course) shy from flaunting this fiery shade of pink, Karan does justice to the bold hue with signature panache.

Also Read: Dear Karan Johar, happy birthday! As an unstoppable fashion force, your style arsenal is above all that BLING, SASS and SPUNK – Here’s why!

On the professional front, KJo garnered acclaim for directing one of the segments in the Netflix original movie, Lust Stories. Additionally, his banner Dharma Productions is engaged in varied movies like Kalank, Simmba, Dhadak, Kesari, Brahmastra and Student Of The Year 2.