Shahid Kapoor is currently in Yas Island, Abu Dhabi as he gears up for his IIFA stint. The International Indian Film Awards 2022 will be held in the UAE city and it is expected to be a grand and star-studded affair. Considering that award functions have rare and few these days owing to the pandemic, celebrities too are excited to attend the event. The award night will see some rather stunning performances by celebrities like Shahid Kapoor, Ananya Panday, Nora Fatehi, Tiger Shroff among others. 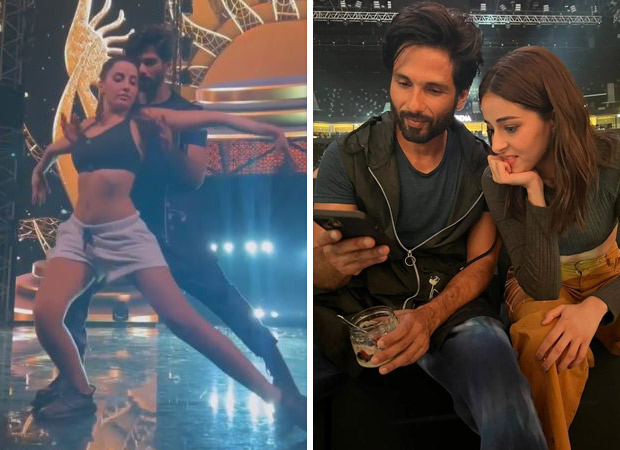 Just a day ago, we had reported that Shahid Kapoor, Ananya Panday, Nora Fatehi, Salman Khan and others flew to Abu Dhabi to prepare for their respective stints at the 22nd edition of IIFA. In a recent photo shared by Ananya, we can see Shahid showing something to Ananya on his phone as the actress looks on curiously. Some fans, who came across the photo, started trolling the duo as they asked if Ananya was discussing her alleged ex-boyfriend Ishaan Khatter with Shahid Kapoor.

On the other hand, another video that started doing the rounds on Instagram was a practice session of Nora Fatehi and Shahid Kapoor. The two of them were seen practicing some sizzling dance moves with each other on the song ‘Zindagi Meri Dance Dance’ and looking at this video, let us tell you that their performance will definitely set the stage on fire. While Nora is a fabulous belly dancer and is also judge of dance reality shows, Shahid Kapoor started his career with dancing and has been background dancer for years.

The main event, IIFA awards night will be held on June 4 at Yas Island, Abu Dhabi and it will be hosted by Salman Khan along with Riteish Deshmukh and Maniesh Paul.