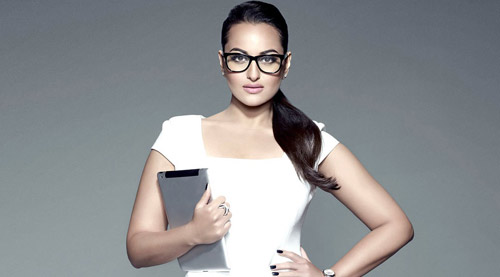 Sonakshi Sinha has yet another thunderous addition to her repertoire. Being a co-star with Rajinikanth isn't something that many leading ladies can dream of today, considering the fact that the superstar has slowed down on the number of films that he does and is seen quite sporadically on screen. However for Sonakshi Sinha, it is the quickest possible opportunity of playing a 'Rajini heroine' that has now been fulfilled with Lingaa.

"It is so phenomenal to be working with him," says Sonakshi Sinha, who started her career with Salman Khan no less and has reached Rajinikanth in a matter of four years and ten films, "He is so grounded and humble; now that is something to learn from. Even if I can achieve 1% of what he has in his career spanning 40 years and 200 films, I would be on cloud nine."

Other than the fact that she worked with a thorough professional who is easily the biggest entertainer from this side of the world, Sonakshi Sinha was speechless when it came to the personal traits the 63 year old actor (who turns 64 on December 12 - the day Lingaa is expected to release) carries.

"I am absolutely stunned to see how nice he is as a person. He doesn't carry any airs of being a superstar at all. He is such a normal and a refreshing person. I used to be amazed practically every day on seeing him humbly meet and greet everyone on the sets," gushes Sonakshi Sinha.

As for her own stint with the film, Sonakshi is glad that she didn't face much of a trouble picking up Tamil. Even though the film is being dubbed in Hindi as well, the original scenes required her to learn Tamil pronto.

"Guess I am luckily good at picking up languages and accent," smiles Sonakshi, "At times I used to be reading from placards. Sometimes I would repeat after people prompted me on the sets. I used to sit with (director) KS Ravikumar and understand the kind of expressions he wanted me to bring for the camera. After doing a few scenes itself, I understood what he wanted me to do. As for my dialogue delivery and diction, my director was shocked by the way I was speaking. As per him, he was impressed that I could come across as a pucca South Indian."

She happily credits her stint with a number of South Indian directors for the stranglehold she managed when it came to picking up languages.