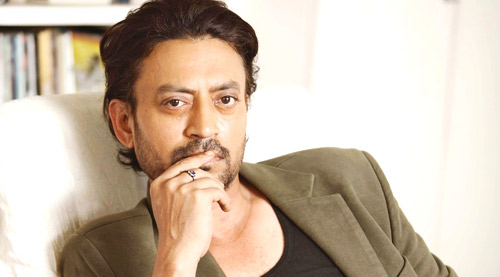 You seem to be having a lot of fun in Shoojit Sircar's Piku?

It is a little different from the characters that I generally play. There is a light side to my character. It is rooted to real life.

You said no to a lot of offers so you could say yes to Piku?

Yes, I wanted to do this film because of my co-stars. I had never worked with Bachchan Saab and Deepika, and I said yes because of the director Shoojit.

(Laughs joyously). She was a dream to work with. We even got to play badminton together for a scene.

What was it like shooting with Mr Bachchan for the first time?

needs. He is so enthusiastic about his character. The excitement rubs off on other actors. I enjoyed rehearsals this time. And he is there hands-on for a film. Even when he is not required to shoot

he would be present on the sets.

She was right there rehearsing with Bachchan Saab and me. She was amazingly dedicated. I had never met her before we started shooting for Piku. That helped us develop our characters. Because

in the film we play two people who are strangers initially and then get to know one another gradually. It was a pleasant journey to know Deepika both on and off screen.

Tabu, Natalie Portman, Deepika...you seem to be working with the most beautiful women?

What can I say? I've no hand in it. I am blessed. Yes, as an actor I feel enthused when surrounded by beauty. Deepika and I both had something to contribute to the story. The fact that she is so

beautiful added to my enthusiasm for my character.

Why are you constantly doing roles that are existentially burdened?

I choose roles from what I get. I usually get serious roles. But I am dying to do a comedy and a romance. In Piku I got to do both. But I'd now like to do them separately.

Tell me about your other projects?

film. It's a comedy in the zone of Abhinay's Delhi Belly.

It's a raunchy comedy?

Yes, quirky comedy about city life and relationships I start this end of the year. I'd also like to do a musical.

Are you producing any more films after the spectacular success of The Lunchbox?

Yes I am producing Nishikant Kamat's Madaari and Mira Nair's nephew Ishan Nair's Kaash. I am not a part of the latter's cast.