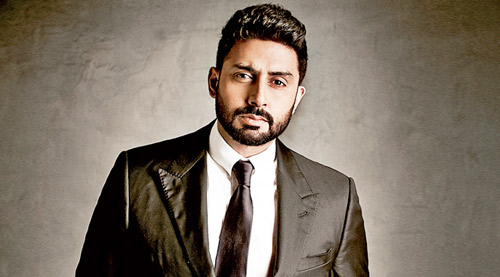 Interviews with Abhishek are wickedly funny at times. Too bad his choicest observations are off-limits. It's easy to see why he's considered the brightest baccha on the star

How come your attitude remains unchanged after so many years in the industry?

What attitude? Each of us here is an individual with our own style and rhythm of working. I've got to be the way I'm. Because I know no other way. You say my sense of humour could be a problem. But

Because everyone here takes himself too seriously.

But why not? We are in a profession where there are constant pressures. We have to take our work very seriously. We're on the cutting edge, so we can't afford to take ourselves lightly. That's the

only way to analyze our weak points and improve. And by the way, I know a lot of stars who take themselves dead seriously and still have a great sense of humour.

How seriously do you take yourself?

I'm getting there. I'm beginning to take myself very seriously.

Have you made a conscious effort to be different in all your films?

I've tried to. I don't know how far I've succeeded. I'm constantly searching for right roles, trying to find what suits me the best. Once I find my mÃ©tier, I'll proceed to elaborate on that, polish

my act and then move on. Some actors quickly find a genre they're comfortable with and then they perfect it. Others do any and everything diverse until they find what suits them. I'm doing the

latter. I still haven't found the role that I can do full justice to. I'm slowly discovering myself as an actor. Once I get the basics right, I think I'll find my niche.

Are you happy with the films that you've done so far?

Yes, not just as an actor but also in their totality. A career in acting is a process of learning. One has to go through the lows to reach the highs. No matter what their box office outcome I've

thoroughly enjoyed working in all films so far. More than the leading man I was part of the production team and it was a learning experience. I'll always stand by these three films, and all my

So far you've worked with friends. Don't you think you should now expand your circle of directors?

That's my attitude to life. I'm friendly by nature. I need to understand my-costars and specially my director to work with them. I'm in no way a recluse. If that makes me non-starry then so be it.

There has to be a great comfort level between you and your directors?

Not necessarily. When I did Refugee JP Saab was so much senior. I know I can get away with murder with him because he treats me like a son. But there's line of familiarity that I wouldn't

scene done even before he finishes narrating it to me. That's because I was completely raw when I started. He nurtured and polished my abilities. For a whole year he sat and briefed me patiently.

Apart from being such a brilliant filmmaker, he's my first director and a close friend. He'll always be special. I miss working with him.

How much progress have you made over the years?

I'm learning. I'm not an authority on acting. I know I come from a family where both my parents are distinguished actors. But I'm not going to tell you what tips they've given me on acting. That

would be like revealing a dark and deep family secret (sighs). I'm improving. But I think I'm beginning to grasp my body language.

Did you have problem with your hands like your father?

I definitely did. In fact I still do. My parents keep warning me about it. I think every actor goes through that. The one who got his hands right is Al Pacino. He loves to use his hands. And he

refused to put them in his pocket when they got in the way. He now uses them creatively.

Are your hands your biggest hurdle in your performances?

No. I think I've much bigger hurdles. My face is too expressive at times. I make too many faces. As an actor, on a scale of 100 I've only gone to 9 or 10. And I'm not being over-modest. That isn't

enough. In today's age the audiences want even a new actor to go to 80-90 in the very first film. And why shouldn't they? I'm lucky to have got the chance that I've because of my parents.

How important is success to you?

Let me put it this way. If I were to just sleepwalk through a film and that film turns out to be a hit, I'd be shattered. Then I'd think, what's the point in working hard? I've never been lazy in

any of my roles, though I've never worked as hard as I can. I look at my father and I say, 'Now that's working hard.' In a creative field one can never be fully satisfied. At least an actor has the

director to tell him where to quit. A painter would go nuts if he didn't apply his own brakes.

Are you comfortable doing a multi-starrer?

Of course why not? Refugee was also a multi-starrer. One has to be confident of one's role and abilities. I've a great director in Anupam Kher. The other day before going for shooting I told

my Mom, 'I'm going back to school'. I've trained under him. He knows how best to use me on screen. Again like Dharmesh he acts out every scene. He's very particular about the performances. He'll be

recognized as a very good director.

You are working in an image-less style. Would you be happy to be known as the Sanjeev Kumar of this millennium?

No I think the era of Sanjeev Kumar is gone. Besides we don't get an actor like him every day. You can't compare me with a great actor like him.

What do you think of Kaun Banega Crorepati?

I'd like it better if they didn't refuse to allow me on the hotseat. I'm really upset about this. The rules disallow family members. Think of the practical convenience. For 'Phone A Friend' all I

have to do is ask my Dad (laughs). I think we could do a spoof episode together. But they aren't allowing me. So it remains an unfulfilled dream.

Do you dream of making a film some day?

Sure I do. Then I wake up to the harsh reality. That I'm still learning to be an actor. Being a director is ten times harder. Right now I want to concentrate on my acting. Let me become a good

actor first. Even my Dad after so many years isn't prepared to direct. I think if he ever decided to direct he's going to be fantastic at it. His knowledge of cinema and his ability to put the

pictures in his mind on screen would be something to watch.

Are you ready for the kill?

Most certainly. You have to be in today's scenario. You know the first time I saw myself on screen was the night before the public release of Refugee. When I saw myself I could think of ten

other ways of doing every scene. But then my father can do every scene in fifty ways. The true test of an actor is to take the smallest and stupidest scene and give it various shades and nuances.

That's what I'm aspiring to. Nowadays, you can't afford to take your career casually. You have to go get it. Otherwise it won't come to you.