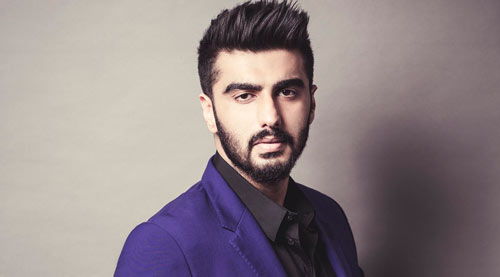 For Arjun Kapoor, the journey from the loutish aggressive nightmare version of Shakespeare's Romeo in Ishaqzaade to the suave home-maker and every woman's dream husband

in Ki & Ka has been pretty adventurous and fulfilling as an actor.

In an interview with Subhash K Jha, the young actor explains why he found the idea of the male spouse as the home maker to be so appealing.

Last week, we saw Fawad Khan playing a gay character in Kapoor & Sons. Now we will see you swapping roles with the housewife in Ki & Ka. Winds of changes in our cinema?

Oh yes! And credit for this must go to audience. Since the multiplexes have mushroomed, a new generation of more mature moviegoers has evolved. Our audience is now far

more open to different kind of characters and situations. The process of change has been on for a film. The year that I was introduced in Ishaqzaade, a very different love story, the very

Any actor would've thought twice and then said no to R. Balki's Ki & Ka? What made you say yes?

This is the only film I said yes to immediately on hearing the story idea itself. Normally, I approve of an idea and wait for it to be developed. I just loved the thought that a man remains a man

even if he runs a home.

Do you think our society is ready for this idea of the man as the 'housewife'?

Why not? Why can't the woman go out to work while the man stays home to look after their home? It's a story that was waiting to be told. If it works, it can start off a whole debate.

You think this film can encourage more men to be home makers?

Why not? I feel there are lots of guys like Kabir who would like to look after homes. But the narrow-minded elements in society don't allow them to flourish.

Did you have second thoughts about whether your pairing with Kareena Kapoor Khan would work in Ki & Ka?

No, Balki chose her because we needed a woman, not a girl, who had to be at the cusp of choosing between home and career. I was already on board when Kareena came in. She is all woman. She is

beautiful to look at and conducts herself with tremendous dignity. There is nothing even remotely masculine about her. We needed a heroine about whom people wouldn't turn around and say, 'Arrey,

It was tricky to get the casting right?

I think the audiences are so pleasantly surprised because Kareena and I seem so right for our parts. I am so glad Kareena came on board. She is a great asset to the film.

How did the two of you get comfortable together?

We did some readings together. But honestly, the comfort level that we needed for our two characters could not be created in rehearsals. I know Kareena for years. We were so comfortable on camera.

That was essential for this film. Just as in Ishaqzaade, it was important for me and Parineeti Chopra to not know one another before facing the camera.

We played two lovers nervous about touching each other. In Ki & Ka, Kareena and I are two practical urban people. We needed to be very chilled out with each other. I had great fun shooting

with her. I teased her a lot on the sets. She took it like a sport. Never got upset. She laughed a lot with me rather than get upset.

Your character in Ki & Ka is quite an unconventional bird. Any trepidation about audiences not relating to him?

It takes time for people to warm up to my character Kabir. But, he is not complicated. He is what that song in Kundan Shah's Kabhi Haan Kabhi Na says about Shah Rukh Khan...Woh toh ahi

albela hazaaron mein akela. If you are loved by your partner, you naturally become attractive to people. We're saying, if two people are into each other then they are not answerable to society.

You think there will be lots of house husbands after Ki & Ka?

Good if that happens. Kabir is an ideal man in many ways. But, we aren't telling the world that husbands need to sit at home and let their wives work. Even if husbands start making a cup of tea for

their wives on Sunday mornings after seeing our film, we'll be happy.

Do you believe you can be like this guy when you get married?

Agar main ghar chalaunga, main ghar barbaad kar dunga. I can be supportive and encouraging. But I can't run the house. But I must say, contrary to the way I look, I've a gentle side which

Your sister looks a lot like your father (producer Boney Kapoor)?

Even me. My walk, the way I interact with people and my physicality are like my father. But my thought processes are like my mother.

Don't you think too much time and money is spent on promotion?