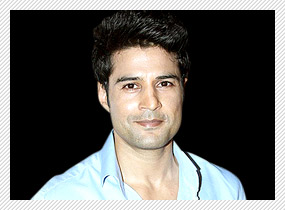 Table No. 21 has turned out to be a surprise offering at the very beginning of the New Year. First release of the year, it has managed to see some good critical response coming its way. While the film is showing signs of some good pick up at the box office, courtesy good word of mouth, Rajeev Khandelwal is happy that in a role that carries grey shades, he has managed to surprise audience all over again.

"I had always maintained that I would be able to surprise, if not shock audience. The film was always meant to be completely about performances and the thrill element while being an edge of seat drama. Also, now that you can see in the film, even I don't have a one dimensional character to play. It isn't linear or monotonous, it is a lot more. I am glad that I didn't let people down", sighs Rajeev who was last seen in a forgettable affair called Will You Marry Me. Incidentally the film was directed by the same young director, Aditya Datt, who has now delivered a quality product in Table No. 21.

"For people who were looking for great content and performances, this film always had a lot to offer. The whole character graph was so complicated that I had to work really hard. To be honest, there were times when I was not getting the pitch and the mood right. It becomes all the more difficult when you work with someone like Paresh or even Tena who is so tough on herself before she gets that perfect shot. I had to make sure that I could stand up and do justice to a scene", reminisces Rajeev.

All hard work indeed seems to have paid off, now that feedback has started pouring and the film is looking at consolidating its position in days to come.

"We are getting amazing feedback and I am very happy. This is what I expected. I am generally very critical about my own work but here I can see that Aditya has got everything bang on. He also made sure that the trailer was not misleading. Otherwise you see so many times people put their best shots in those two minutes. However in case of Table No. 21, 80% of the film was not even there in the promo; it was discovered as the film progressed", he says.