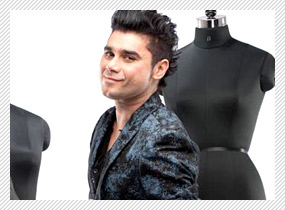 After carving a niche for himself in the Australian fashion scenario, designer Rajat Tangri moved back to India. His dazzling creations have always been a hit in the fashion circuit. Specializing in high end western couture and prÃªt for men and women, Rajat's unique creations found a fan following with celebrities like Kangna Ranaut, Shilpa Shetty Kundra, Chitrangda Singh, Bipasha Basu, Sonam Kapoor, Randeep Hooda, Aftab Shivdasani and Vidyut Jamval.

Having dressed the likes of Paris Hilton, Orlando Bloom, and Kylie Minogue on the international platform, Rajat has now forayed into Bollywood with ambitious films like Shootout At Wadala and Mary Kom biopic. Bollywood Hungama's Divya Rajani spoke to designer Rajat Tangri about his foray into fashion, his latest collection, styling Priyanka Chopra in Mary Kom and more.

Tell us something about your background
I graduated from the Royal Melbourne Institute of Technology, Australia. My unique design philosophy found great representation with celebrities and fashionistas through personal styling, shows at fashion weeks and collections at chic boutiques in India, Australia and other countries. Today, I am an established Australian-Indian designer label that specializes in high-end western couture and prÃªt for men and women.

How and when did you decide that you wanted to be a Fashion Designer?
When I was in year 10th standard I was into fine arts and wanted to be an artist. I realised my second love was clothes and that would fetch me a better living; so I opted for fashion though my father wanted me to be an architect. However he supported me regardless.

Your latest collection at LFW was highly appreciated; could you tell us something about your collection?
My collection focused on irregular touches, multiform layering and draping expressing the fluidity of cascading water, and satellite view of the planet. I used cold and absolute colours like fog, sage, coral, midnight blue and an accent of copper with a dash of black. My collection had structured fitted dresses and jumpsuits for women and sharply tailored suits for men. There were gowns with matchless mother of pearl, opal stone and copper embellishments. This signature collection had exquisite Italian blended cotton fabrics, silks and stretch satin, with luxury craftsmanship and fine finishing in keeping with the label's principles of comfort, sensual elegance and urban style.

What was your inspiration for that collection?
The winter season with its cool and fog inspired me.

You have now ventured into styling for films. How has that experience been?
So far so good...I got to learn a lot...every film is a different experience and I am enjoying each experience.

Kangna Ranaut's retro look in Shootout At Wadala received rave reviews. How did you decide on the look considering there wasn't much information available about her character Vidya?
When it was narrated to me Sanjay Gupta the director told me that there is no reference on Vidya...so we decided to focus on the periods. For the first half of the film where Kangna plays a college going girl, we drew inspiration from the late 60's. In the later half she was projected more of a woman in her mid - late 20's, therefore there had to be a remarkable difference in the looks. So for the other half, the late 70's era was a major inspiration extending to early 80's. I went to the archives researched magazines of that era, observed the styles and got sarees, etc. all printed specially keeping the retro feel intact.

You are currently working on Mary Kom biopic. What kind of research have you done for Priyanka Chopra's styling in the film?
I have sketched a very different look for Priyanka with respect to her past glam avatars. While preparing for LFW I was also travelling to Manipur, and visited Kangathei, the hometown of Mary Kom, researching on the weaves, crafts, patterns and colours of Manipuri tribes and Kom's dressing style in particular. Manipur is an intriguing place where around 100 tribes reside. Mary hails from a tribe name Kom, who call themselves the descendants of Thai. Priyanka's look is divided into four stages Mary Kom as a Kid, post marriage, when she got into boxing and when she became the champ. The look is chalked from a traditional to more athletic and sporty. I am sure she will carry it off very well and critics will love her look.

Did you get a chance to interact with Mary Kom?
Not really but we got a lot of information on her life including her personal photographs right from her childhood to date, which was a huge source of information.

How has the experience of working with Priyanka been?
She is a very professional and diligent actor. It has been an amazing experience working with her. I love her attention and eye for detail.

What are your other plans for 2013?
After the Mary Kom film, I will be working on 2 more projects and the fashion week in August.

How can our viewers be stylish this rainy season?
Brighten up the dull monsoon season with bright colours. Wear short skirts or pants so that they do not get soiled in the rains. Pants, churidars or pyjamas should be in dark shades for the same reason. Wear fabrics that dry easily and not those that absorb the water and retain it like cottons and jeans

The actress you enjoy working the most with is...I like working with everyone ... there is a certain something that everyone teaches you and this helps you evolve.

The best dressed Indian...Male would be Mr Anil Kapoor and Imran Khan and Female is Kangana

Colour of the season...Emerald green

The Big Trends of 2013 are... Shimmering sequins and organic fabrics for tops or sarees is trendy. Purple is the new black. White will continue to impress in 2013 too as well as shades of aqua, a subtle sense of tangerine and Victorian rose, are set to impress during this year. 2013 will see more organic fabrics. Funky and stylized flats for foot wear will be the in thing. Neckpieces will continue to dominate the scene