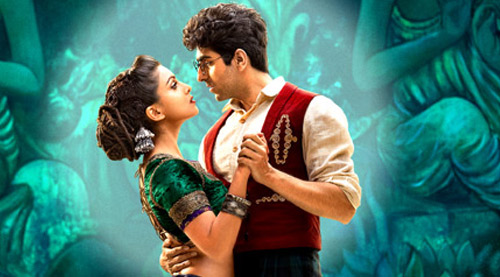 Do you ever wonder what it would be like to fly? Then see Hawaizaada, a film that soars into the skies with its overweening ambitions and miraculously manages to stay airborne as it chronicles the life a man who wanted to fly.


Debutant director Vibhu Puri's first very accomplished film, a tribute to the scientist who apparently manned the first aircraft that civilizations has ever flown, is a stunning feast of visual splendour, compounded with a script that's tightly and judiciously written to accentuate the audacity and eccentricity of people who can float in the future.


Straightaway it can be said with great pride that Vibhu Puri's debut is a homage to the art and visual aesthetics of Sanjay Leela Bhansali. Every frame is reminiscent of several Bhansali creations, notably Devdas and Saawariya, the former for the theme of unfulfilled love (with Khurana's capricious love interest Pallavi Sharda forming a fusion of Paro and Chandramukhi's two-layered character from Devdas) and the latter for the rich bold use of flamboyant colours to highlight the heightened opera-styled emotions.


Hawaizaada attempts an almost-impossible marriage of a visual splendour with emotional surrender. The characters, be it the whimsical aimless Shivkar Talpade or his kooky mentor Shastry, or the Britishers who scowl at any attempt by Shastry and Talpade to create inventional history....these are people who don't believe in holding back emotions.When they feel show. Period.


Ditto director Vibhu Puri. Pulling out all stops he bathes every frame in Bhansalesque hues, creating an atmosphere of heightened reality. The year is 1895 .The possibilities of recreating that era in present times seems far-fetched and unlikely. Thanks to his art directors (Subrata Chakraborty, Amit Ray), music composers (Vishal Bhardwaj pitches in with a zestful lavni filmed on the gorgeous Ms Sharda) and most specially his incredibly gifted camera-person Savita Singh (who happens to be Puri's wife), Puri has constructed a world as unthinkable on paper as the theory of flying a plane must have seemed to Talpade's contemporaries.


Thank God for the dreamers,back then and now.


Vibhu Puri takes Talpade's dream and weaves it into a love story that Bhansali could've filmed if it hadn't already been done in Devdas. The relationship between Talpade and the tamashawali dancer Sitara (Pallavi Sharda) runs through the narrative with a barefooted artlessness. This is love in its purest form, selfless and all-sacrificing. We don't see much of that variety of love in the popular arts any longer.


The popular idiom is taken to a level of high-art in the Broadway styled songs and dances where the magic of love and discovery unfolds like a Kashmiri carpet coming undone on the floor. Bit by bit Puri weaves his tender magic into the tale of an explorer whose joy of discovery goes from seeking love to finding flight.


Hawaizaada is a film with tempestuous ambitions. Co-writers Vibhu Puri and Saurabh R Bhave use Talpade's dream of flying as a metaphor for anyone from any era who has dreamt of breaking free. The pronounced but muted metaphor is extended into Talpade's extend family of repressed character, again very Devdas-like in its operatic structure. There is the growling father (Jayant Kripalani), tightlipped mother (Natasha Sinha), smirking brother (Mehul Kajaria), dominated bhabhi (Priyanka Sethia)....They all long to, well, fly .

Encircling this wide arc of wannabe fliers who are piloted into the epic plot by Talpade's navigational dreams, couldn't be an easy task. Vibhu Puri manages the seemingly impossible maneuvering skillfully joyously and playfully through lives in an era when oppression was a pre-condition.


Wisely he has selected three relationships in Talpade's life to pin down the epic narrative. We see Talpade's dreams unfold in his interaction with his mentor Shastry (Chakraborty), his beloved Sitara (Sharda) and his curious precocious defiant little nephew Narayan (Naman Jain, that extraordinarily gifted boy from Zoya Akhtar's segment in Bombay Talkies).


The characters jump at us from the screen with their sheer zest for life. Hawaizaada is a film bursting with nervous seamless energy. This is most evident in the Broadway styled songs and dances (again, reminiscent of Bhansali's Saawariya) dexterously choreographed by Longinus Fernandes. When the characters negotiating their way through the quaint bustle of Bombay in 1895, sing and dance they let us know through their sly sonority that their bodies can be dominated by an oppressive regime. But their spirit roams free.


Soaring on a dream, Hawaizaada transports us into an enchanting world of a dream-reality where anything can happen. Birds can sing, human being can fly....whatever! Fuelling the impossible dream is the central performance by Ayushmann Khurrana. He breathes animated life into Shivkar Bapuji Talpade, the audacious 19th century scientist who dared to fly. Khurrana plays Talpade as a trippy dreamer, a Devdas drunk on his dreams.


Mithun Chakraborty as Talpade's mentor is goofy eccentric and endearing. This is the much-loved actor's most effective performance in years. As for Pallavi Sharda, though admittedly that well-toned gym-produced physique doesn't jell with the film's periodicity, she is a revelation doing an amalgamation of Paro and Chandramukhi from Devdas. Besharam is forgotten and forgiven.


Going back in time is never an easy task in cinema. Many have failed to court periodicity convincingly. Hawaizaada gets away with its flight into the mind of the man who dared to fly. This miniature masterpiece leaves us exhilarated and exultant. Thank God for the dreamers, past and present.