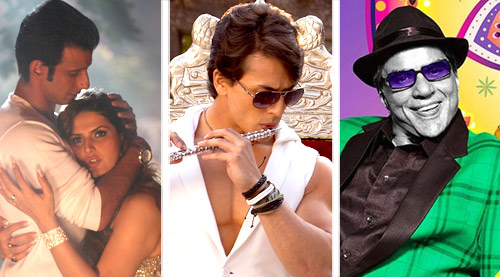 The phenomenon is at an all-time high: old classics are being re-created left, right and centre in new Hindi films. So all-pervading is this trend that we are mentally set to

explore such "items" (what else can we call them?) in almost every fifth major release, and often in the smaller ones.

Nadeem-Shravan in the 1991 film Sadak. To its credit, the song is imaginatively re-written by Rashmi Virag, but in a way, that also defeats the main objective: because very few of today's

generation may actually connect this with the original.

Yes, the question of copyright issues and credit lines in such songs-irrespective of music label-is cursorily dealt with-a passing mention in small print on the CD inlay. But in an era wherein CD

sales have reached a nadir and most listeners prefer legal (or illegal) downloads, the song, if it proves popular, will rob the original creators of due credit. In most cases, even on the inlay,

the music company is mention as the commercial deal is struck between two music labels. Besides, of late, T-Series is mostly redoing tracks originally released on their own label, and are now being

reused in their own productions!

This leads to many piquant situations-the music of Heropanti, for example, was on T-Series, but the track 'Whistle Bajaa' inspired by the music riff of 'Lambi Judaai' from the

1983 HMV hit Hero, had to be released on Saregama-the new name of the HMV label in India!

were forced to take the pragmatic way out because of the change of label. The song was finally re-recorded by Sonu Nigam, some portions added by RDB as the new music label was T-Series! This was

not without irony: for both Pratiggya in 1975 and Yamla... in 2011 were both Dharmendra's home productions and technically, they owned the earlier song too!

T-Series, off-late, has been unleashing a blitzkrieg of re-created songs in their own productions. It all began with Karzzzz, in which the song 'Ek Haseena Thi' was repeated from the

1980 Karz from which the film was taken. However, here again, the original was with Saregama.

That is probably why there was a long gap till the 2013 Nautanki Saala! came along, in which Anand-Milind's 'Dhak Dhak Karne Lagaa' (Beta) was refurbished by Mikey McCleary,

while he also treated the Tezaab hit 'So Gaya Yeh Jahaan' to a faster beat by retaining the original Laxmikant-Pyarelal recording and voice.

T-Series' list of such songs from their own musical repertoire has been burgeoning by the day. All Is Well had a changed version of 'Ae Mere Humsafar' (Anand-Milind / Qayamat Se

their non-film top seller Deewana (2000), both done by Meet Bros. Anjjan. In their non-starter I Love NY, T-Series re-created R.D. Burman's title-track from their own production

T-Series continued to use this ploy in their small film Bhaag Johnny, in which another Deewana track, 'Iss Qadar Pyar Hai' was rehashed by Arko. And in a hit single that they

into a non-film video single by Yo Yo Honey Singh!

Says Vinod Bhanushali of T-Series, "If we find that an old hit of ours can fit into a situation in a new film, we decide to use the opportunity to re-create it with updated words and sound, keeping

the composition essentially same, as everyone have got used to the tune after listening to it for years. In any situation, the mood needed should match that of the song that we use and the thought

must be on the lines of the original. We then look for the right changes that can justify the essence of the older song and the needs of the latter."

He admits that in a way, it is a revival of their old catalogue, but he stresses that some amount of market research also goes into this phenomenon. "Though so far, we have had almost a 100 percent

success rate, it is not easy to crack which old song will work, and so it is not something we are doing to make a fast buck,' he says.

Also, what is known as a re-creation today is not the same as the Jhankaar Beats phenomenon of the '80s or the "remixes" of the '90s and early millennium. The former were like cover versions

done as gimmicks, with even male songs sung by female singers and vice-versa with the addition of gaudy beats. The latter also had this quality but were either a re-treatment of the originals or

re-interpretations of the older melodies, but usually with videos. The lyrics and even the tunes were untouched by and large, and none of these tracks were ever used within a film.

And let us not forget that the oldest way of pressing F5 on an older song were the parodies we heard down the decades, from that of a single song that was reworked with a humorous angle ('Jab

songs used with or without changes in lyrics in films like Mr. India, Maine Pyar Kiya, Lamhe and others.

The first widely known actual re-creation was when 12 R.D. Burman songs were remodelled in Dil Vil Pyaar Vyaar (2002), making up its entire soundtrack. However, none of the songs nor the

film worked, as they were shabbily redesigned and sung and filmed both irrelevantly and irreverently, like solos turned into duets! This was intended to be a tribute album to the senior composer.

Another film that paid him a tribute was Jhankaar Beats (2003), in which Amit Kumar, original singer Kishore Kumar's son, sang 'Hamein Tumse Pyar Kitna' from Kudrat.

and was actually re-recorded by Jatin-Lalit. Technology has also been used to incorporate the older songs and the original voice into their newer versions, as in utilizing the title-track of

'Sabse Bada Rupaiya' in Bluffmaster! (2005), the title-track of Bachna Ae Haseeno (2008) from a song of that name in 'Hum Kisise Kum Naheen', and similar conversion of

Re-creations, Karzzzz apart, were also common when the films themselves were re-made, like in Don, Victoria No. 203, Zanjeer (where the song 'Kaatilana' was a clever

redux of 'Diljalon Ka Dil Jalaake' from the older film) or Himmatwala.

In the blitzkrieg of such renovations, Laxmikant-Pyarelal and R.D. Burman led the honours with 23 songs each, with the latter having 12 of them in just one film and two more blended into just one

song ('Duniya Mein' and 'Monica O My Darling' in 'Parda' from Once Upon A Time In Mumbaai). For the record, the only tunes re-done more than once are the aforementioned

flute riff of L-P's Hero, heard both in Gang Of Ghosts and Heropanti, and Rajesh Roshan's Lootmaar hit 'Jab Chhaye Mera Jadoo' in both Hattrick and Charles Aur

compositions, the need is clearly not just commercial but also nostalgia-based for many filmmakers and composers-it is a way of paying tribute (as happens internationally) to iconic creations by

having their own interpretations worked into a film.

So all we need to do is to just wait for a deluge in the years to come.