Kareena Kapoor Khan, Sonam Kapoor, Swara Bhasker and Shikha Talsania are all set to bring a complete chick flick and an out and out entertainer with Veere Di Wedding. Co-produced by Ekta Kapoor and Rhea Kapoor, the first trailer was released just two days ago and it is all about the modern day women and it looks interesting. While the actresses are ready to promote their film, they recently did a photoshoot and looked fabulous in it. 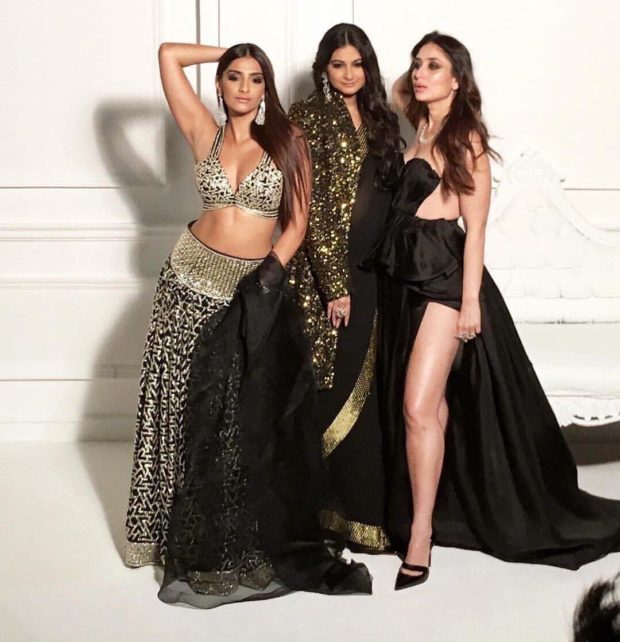 In a series of photographs doing the rounds of social media, Kareena Kapoor Khan is slaying in her sexy avatar. Doing a black top with a thigh-high slit skirt and heels, she looks absolutely stunning in it. Sonam Kapoor, on the other hand, has donned a rather desi look in a beautiful sequinned lehenga and choli. Rhea Kapoor, the producer of Veere Di Wedding, looked beautiful in a heavy work sequined long blouse with a black saree. They are reportedly shooting for the promotional campaign for the film.

The official synopsis of the film reads, "Drumrolls... The veeres are here in style & grandeur! Get ready to relive childhood friendships, everlasting bonds & soulmates for a lifetime!" The film is directed by Shashanka Ghosh, produced by Balaji Telefilms, Anil Kapoor Films & Communication Network and Saffron Broadcast & Media Ltd. Veere Di Wedding is slated to release on June 1, 2018.