Taapsee Pannu is gearing up for her South film release, Game Over, whose Hindi dubbed versions too are releasing across the country. The actress is prepping for the release of her psychological thriller in which she plays the role of a wheelchair bound video gamer. While we got a glimpse of her unconventional role in the recently released trailer, the film is expected to release in theatres this week and the poster ads of the film have already found their way to multiplexes amidst other releases like Salman Khan starrer Bharat and the Chris Hemsworth American spy action film Men In Black: International! 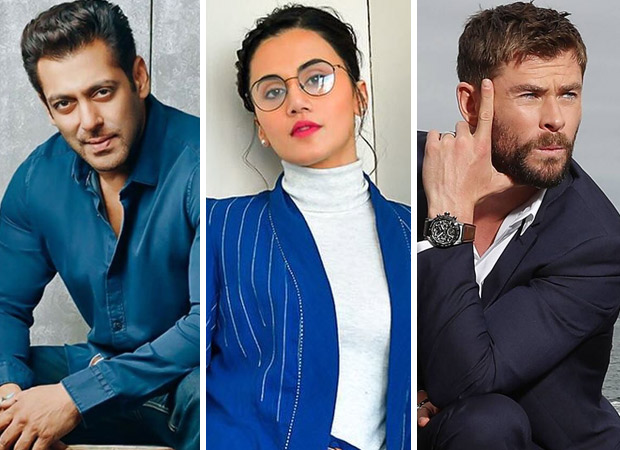 Here’s why Taapsee Pannu feels she is sandwiched between Salman Khan and Chris Hemsworth!

Readers may be aware that Bharat has opened to positive responses and it is one of most awaited releases. Also, considering the hit combo of Eid and a Salman Khan release, the film is doing brisk business at the box office. On the other hand, there is ample anticipation around Men In Black: International starring Chris Hemsworth and Tessa Thompson and it is expected to hit the theatres this week, just like Game Over. Keeping in mind these facts, a photo was retweeted by Taapsee Pannu on her Twitter handle of a multiplex ad board which was initially shared by the film’s director Ashwin Saravanan. The said ad board features three posters of films, which include Bharat, Game Over and Men In Black with the Taapsee starrer in the middle. Captioning the same, Taapsee expressed that she feels that she is getting sandwiched between the two posters! Here’s what she said:

I feel like a sandwich stuffing! N my expression on the poster shall validate that! ???? https://t.co/jEIK57phtw

Game Over is expected to release on June 14 in three languages, namely, Tamil, Telugu and Hindi. While the film was supposed to be a bilingual, Taapsee’s friend Anurag Basu decided to present the film in the dubbed Hindi version too.

Also Read: When Taapsee Pannu got heavily bruised for her next film Game Over