It seems that the filmmakers and actors in Bollywood are so busy with their schedules that very few are able to take time out for their birthdays even. Producer-director Nikkhil Advani too is amongst the ones who have a packed schedule and he recently decided to squeeze in his birthday celebrations amidst work. He decided to spend it with the team of Satyameva Jayate. 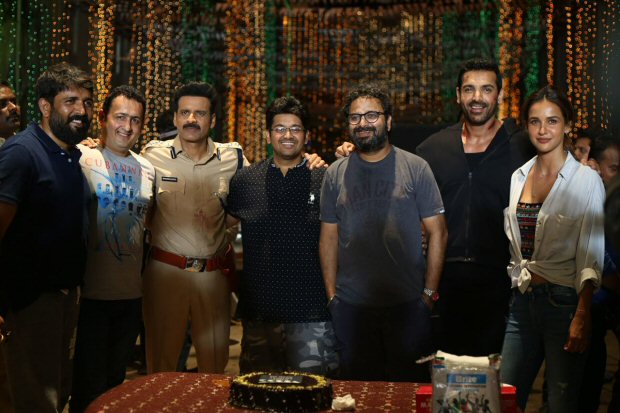 Movie buffs may be aware that this John Abraham, Manoj Bajpayee starrer Satyameva Jayate has gone on floor recently. While John and others have been giving sneak peeks of the shoot on social media, we now got a glimpse of Nikkhil Advani’s birthday celebrations too. Here’s a picture that was taken before the cake cutting ceremony from the sets of the film.

In fact, the picture features the lead cast of the film which includes John, Manoj and debutant Aisha Sharma. Aisha will be making her Bollywood debut with this film and is being paired opposite John Abraham in Satyameva Jayate. Also joining them in this image is the director of the film, Milap Zaveri. Many would know that Milap recently took up a fitness regime and this photo is proof that it has done wonders for him.

As for Satyameva Jayate, although the details are being kept under wraps, it is being said it is a thriller which will feature many high octane stunts. Also, the title of the film was locked after Aamir Khan gave a nod to the same. The superstar owned the rights for the words Satyamev Jayate owing to his popular show on TV by the same name. But it seems that the actor indeed lent the title to the makers of this film after they approached him for the same.

Satyameva Jayate, produced by Nikkhil Advani and Bhushan Kumar, is expected to hit the theatres on August 15 this year. This will be John’s next release after Parmanu – The Story of Pokhran which is slated to release on May 25.

Manoj Bajpayee on going digital during the…