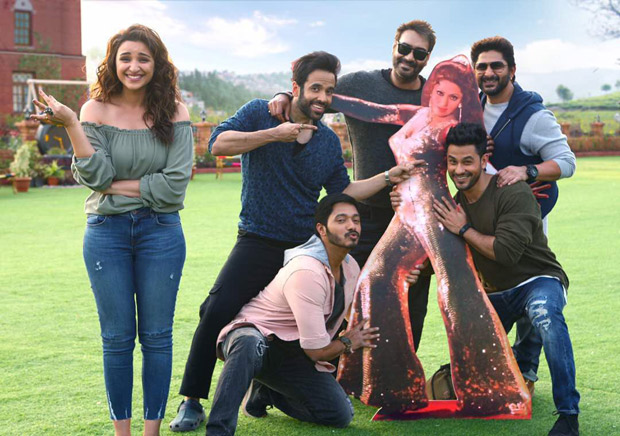 By now we all know that Parineeti Chopra is busy working on her next venture Golmaal Again. But apart from the shoot the actress is also keeping pace with the promotions of her soon to release film Meri Pyaari Bindu. Now given the fact that the cast of Golmaal Again that comprises of Ajay Devgn, Arshad Warsi, Tusshar Kapoor, Shreyas Talpade and Kunal Khemu, who are all known for the pranks they pull, the team decided to help their co-star promote her film.

Interestingly, instead of making an appearance at one of her promotional gigs across the country the entire team of Golmaal Again decided to surprise Parineeti Chopra by posing with a cut out yesteryears actress Bindu, the same name as Parineeti’s character from Meri Pyaari Bindu. Though it isn’t quite clear how them posing with a cut out helps, the entire scenario did make for a good laugh and an even better prank. Posting about the same on social media Paineeti added, “My crazyyyyyy boys!!! Love them #MeriPyaariBindu #GolmaalAgain”.

As for the film Meri Pyaari Bindu that is produced by Yash Raj Film and is directed by Akshay Roy also features Ayushmann Khuranna alongside Parineeti Chopra. The film is slated to hit screens on May 12, 2017.