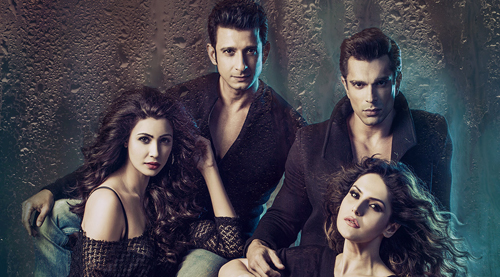 In a year that has seen quite a few female centric films release with Piku [Deepika Padukone] and NH 10 [Anushka Sharma] turning out to be successful, the

culmination would be with the arrival of as many as three such films and that too on a single Friday. Come December 4, and Hate Story 3, Angry Indian Goddesses and Kajarya would take

"This has happened all of a sudden though," a trade observer comments, "The only film which was always in the running of this date was Hate Story 3. It is only after Mastizaade moved

to January 2016 that other two films joined in as well. Angry Indian Goddesses had earlier its eyes set on the post Diwali weekend but they rightly chose to avoid massive challenge in the

form of Prem Ratan Dhan Payo. Kajarya is ready since 2013 and is now seeing a sudden arrival before close of 2015."

What makes the clash interesting is the fact that between these three films, as many as a dozen odd females would find key prominence on the big screen.

"Hate Story has always been a woman-centric franchise and though third in the series features Sharman Joshi and Karan Singh Grover, the selling points are of course Zareen Khan and Daisy

and Pavleen Gujral. Each one of them has a prominent role to play in the film which hardly has any male presence. As for Kajarya, it has newcomer Meenu Hooda in the title role along with

Of course, between the three films, it would be Hate Story 3 that would find maximum screen count and attention as well, at least till the day of arrival.

"Hate Story 2 with Surveen Chawla did more than double the business of Hate Story that was made with newcomer Paoli Dam. Now Hate Story 3 has Salman Khan heroines like Zareen

[Veer] and Daisy [Jai Ho]. It is bound to make noise," the observer adds, "Angry Indian Goddesses can't be taken lightly either because contrary to perception, it is not an

offbeat affair. It is as commercial as it gets and while it has found good acclaim in the festival circuits, it has in it to gain acknowledgment as Bollywood's first female-buddy flick. On the

other hand Kajarya has hard hitting drama at the core of it all."

The year started off with a female centric Dolly Ki Doli. One has to see how it ends with the clash of Hate Story 3, Angry Indian Goddesses and Kajarya.