Zee TV’s popular fiction show, Guddan Tumse Na Ho Payega, has received immense love from the audience courtesy its consistent unique and intriguing storyline. From entertaining the viewers with its unique and never-seen-before concept revolving around the country’s youngest Saas, younger than the bahus of the household, to introducing a 20-year leap that depicted the ups and downs in Choti Guddan’s life, the show has been well appreciated by the audience. While Akshat (Nishant Singh Malkhani) and Guddan’s (Kanika Mann) stunning chemistry became the talk of telly town and was loved by the viewers, Agastya (Savi Thakur) and Choti Guddan’s (Kanika Mann) fresh and innocent love story also soon found a place in the audience’s heart after the leap. Having intrigued and entertained the viewers with interesting stories for nearly 2 years, the show is now all set to bid adieu and will be replaced by Zee TV’s new fiction property Teri Meri Ikk Jindri which will air at 8 pm, every Monday to Saturday on Zee TV. 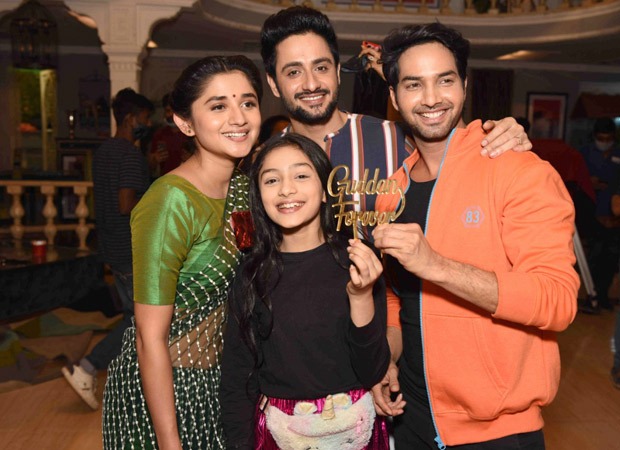 During the period of two years, the show welcomed many interesting and well-defined characters that were convincingly played by some very talented actors like Kanika Mann Nishat Singh Malkani, Savi Thakur, Maera Mishra, Pratham Kunwar, Rashmi Gupta and many more. Wrapping up memories and moments of nearly 2 years, the entire cast and crew bid a heartfelt farewell to each other as they commemorated the moment by cutting a cake on the set while wiping away tears of joy.

Sharing her moment and expressing her thoughts, Kanika Mann shared, “I got to know about it(show going off air) on December 31 and thought to myself, what a day to learn that your debut show is wrapping up. At first, I was shocked, but I comforted myself by thinking that the New Year will mark new beginnings for me. I stayed positive. However, I could not hold back my tears while shooting the last scene. I just couldn’t muster the courage to speak those lines. That’s when it really started sinking in and I felt like something was drifting away from me. Whatever I am today is because of this show. I was new in the industry. Along with Guddan, who evolved from a jhalli ladki to a mother, I, too, grew as a person and an artiste. ‘Guddan’ is my baby. I am so attached to it that I don’t know how long the feeling will last. However, I would like to thank the audience for being our pillars of support and strength. Love you all”

Adding on actor Savi Thakur mentioned, “The news was shocking at first and of course, I really do wish that there was more of Agastya that could have been explored as a part of this show. I am extremely sad hearing the news but having said that, I believe that certain good things end only for better things to take their place. I feel blessed to have been a part of a show with such an out-of-the-box concept and it goes without saying that I am going to miss this show terribly. Now that the show is coming to an end, I cannot help but say, all's well that ends well. I just want to thank all the people involved with this show and more importantly, to all our viewers for constantly loving and supporting us in this journey.”