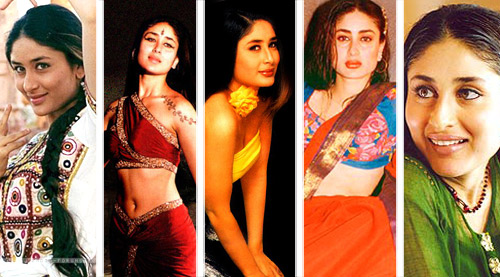 In her 16 year career Kareena Kapoor has covered herself with glory on several occasions. Here is a list of her 10 most dazzling performances.


1. Refugee (2000): J.P. Dutta introduced Kareena as he would his own daughter. Randhir Kapoor was a dear friend and he made the director promise his daughter would get the kind of

launch other newcomers can't even dream of. Kareena playing a Bangladeshi girl crossing over into Pakistan was compared with Madhubala and Nutan. No female newcomer has made the stunning impact she


2. Asoka (2001): So you thought Kareena was a dazzling diva in her debut film. In this follow-up project, she was a mercurial princess in the Mauryan dynasty. Eyes swathed in kohl,

her lightening movements in the song 'San Sanana San' were stuff meteoric dreams are made.

darling of the I-me-myself generation. Her stunning looks and crisp chemistry with Hrithik Roshan stood out. Kareena's 'Poo' act has been imitated ad nauseam notably by Alia Bhatt who is often

director Sudhir Mishra. This was the closest Kareena came to doing offbeat cinema.


5. Yuva (2004): Many, including Jaya Bachchan, consider this to be Kareena's career best performance. She indeed dazzled as the fey whimsical Mira, a kind of spiritual gypsy who

doesn't know where life is taking her. Under Mani Ratnam's direction, Kareena blossomed as only she can, when given the chance.

6. Dev (2004): 2004 was a watermark year for Kareena, bringing out as it did the best in her performing skills. She had a brief role in Govind Nihalani's film about love loyalty and

betrayal during times of communal riots. In one sequence, where her character Alia had to testify against rioters, Kareena's performance touched the sky.


7. Omkara (2006): Kareena's Dolly Mishra was Othello's Desdemona gone to the cow belt...from there, Kareena took her Shakespearean character to the wow-belt as only she can.


8. Jab We Met (2007): Considered by all Kareena fans to her career's best. In Imtiaz Ali's film, Kareena played what she likes best. Her very own favourite person. Of course, this

single-minded self-regard lands her character in some kind of a mess in life. But that's okay. Kareena's Geet remains one of her kind. Impulsive and zestful, grabbing life's experiences hungrily


9. Talaash: The Answer Lies Within (2014): After a long phase of indifferent performances, Kareena dazzled as a ghost chasing Aamir Khan. Kareena made the ethereal character

stunningly believable. Does Kareena believe in ghosts? I don't know. But after watching her, we certainly did.


10. Ki & Ka (2016): As the working-wife of a house-husband, Kareena Kapoor is beguiling in her beauty, unmatched in her ability to make the character her own. Ki & Ka proves

there is only one Kareena Kapoor.